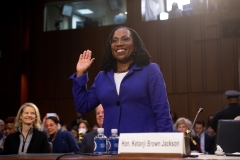 Judge Ketanji Brown Jackson is sworn in prior to testifying during a Senate Judiciary Committee confirmation hearing on her nomination to become an associate justice of the Supreme Court. (Photo credit: SAUL LOEB/AFP via Getty Images)

Setting aside Judge Ketanji Brown Jackson’s record on unions and pedophile sentencing, it’s clear from her resume that she boasts many qualifications, and will likely be confirmed to replace Justice Stephen Breyer on the Supreme Court.

During her nomination hearings, Republican members of the Senate Judiciary Committee asked a handful of questions that caused controversy.

While sometimes these questions earn senators a reputation for grandstanding, this time, many of the questions paved the way for answers that revealed Jackson’s judicial temperament, legal philosophy, and how she makes legal decisions.

One such question from Sen. Marsha Blackburn (R-TN) seemed particularly important. Here is a transcript of the brief exchange:

Blackburn: "Can you provide a definition of the word 'woman'?"

Jackson: "Not in this context — I’m not a biologist.…In my work as a judge, what I do is I address disputes."

This is not a normal line of questioning, because the definition of “woman” has not been ambiguous up until the last few years. However, as the number of people who have medically or socially transitioned from male to female has increased and gained acceptance into society, sometimes usurping women sports, even basic words have lost their meaning.

Society has known the definitions of “woman” and “man” for millennia. This was not a trick question, but probably a primer to understanding where Jackson might rule on cases that specifically address issues of gender and sex, cases like Bostock v. Clayton County, which now bars discrimination based on gender identity, just as the law bars discrimination based on sex.

The writer Andrew Sullivan tweeted that Jackson’s answer was great as it was a “an affirmation of biology as the core basis for sex.” This could be a generous interpretation of Jackson’s inability to answer such a basic question, but unfortunately, it is so simple, the takeaway seems more like Jackson deftly skirted a topic that has become a lightning rod for the right and the left.

By refusing to answer the definition of “woman,” Jackson leaves the door open to what she thinks about sex, gender, and controversial cases like Bostock v. Clayton County.

If Jackson knows the definition of “woman” but remains afraid to say so, this is certainly a red flag. In a free country, a Supreme Court nominee should be able to speak the truth without fear of repercussion.

If Jackson is unable or unwilling to define what a woman is in a legal sense, this can pose real problems for future cases she may hear as a sitting Supreme Court justice. How can she know what the law says on sex and gender identity if she cannot define sex? How can she rule in cases on women’s issues or rights when she isn’t sure how to define a woman?

Furthermore, as my friend Mollie Hemingway tweeted, “If you lack both the common sense and the education to understand what being a woman is — or you’re too terrified of your political allies to admit you do know — perhaps you should not have a job that affects other people in any substantial way.”

The refusal to define sex in a traditional manner is not just a “woke” trend without meaning that simply sounds happy and inclusive of the new gender rainbow that boasts over 60 gender identities and expressions. It has consequences. If “male” and “female” cannot be described, that leaves multiple expressions to be codified into law that would create loopholes for predators to abuse women and children.

To make matters worse, it’s hard to overestimate how hypocritical this entire charade is when President Joe Biden himself promised to nominate specifically a black female for this role — white males had no chance — and then Jackson treats the issue like it’s a great mystery, too complex even for her.

As tempting as it might be to chalk up this question to political grandstanding or Jackson’s answer to cleverness, don’t: Jackson purposefully played a game of semantics with an issue that has torn apart tenets of law, families, sports, and education. As a woman, she should know this.