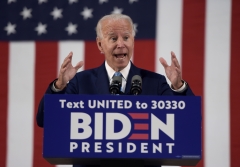 Now that a Democrat is back in the White House, at least two federal agencies have continued some of the commitments President Barack Obama had made to the transgender community — to the detriment of faith-based employers.

The Biden Administration’s Department of Health and Human Services has committed to continuing a gender identity mandate the department imposed back in 2016 that compels health care providers to facilitate or perform gender identity-related services against their religious beliefs.

Currently, there are no religious exemptions to either of these mandates.

The trickle-down effect is that the Biden Administration continues to deploy these two agencies to force religious nonprofit and for-profit employers to pay for and perform surgeries, procedures, counseling, and treatments that would attempt to change a person’s “gender identity.”

People of faith are fighting back in a new preemptive lawsuit, claiming that the mandates substantially burden their religious freedoms. Alliance Defending Freedom attorneys are representing the Christian Employers Alliance in its challenge to these unconstitutional mandates.

"By misinterpreting and improperly enforcing federal law, President Biden has far overreached his constitutional authority, to the detriment of people of faith across the country. The government cannot force Christian employers to pay for, and Christian health care providers to physically perform, harmful medical procedures that contradict their religious beliefs. We urge the court to immediately halt enforcement of these unlawful mandates."

Providing coverage for “sex change” surgeries, cross-sex hormones, or other related things — especially via federal mandate — is particularly egregious to conservatives and especially to people of faith. Most people, save for a progressive minority, believe that sex is binary — there are only men and women — and that gender is not fluid to each sex but simply an expression of each sex.

The majority of people who embrace Christianity as their faith tradition believe God created men and women specifically — only two sexes — and it would be an affront to their faith to try and advocate to change those through such drastic, and often damaging and life-altering, means.

In a statement after the hearing, Christian Employers Alliance President Shannon Royce said:

"CEA counts it a privilege to stand for truth — that all people are created in the image of God as male or female. The administration’s mandates are crippling for the countless Christian-owned and operated businesses seeking to care well for their employees without the fear of punishing fines, burdensome litigation costs, the loss of federal funds, and even criminal penalties. As stewards of the health and safety of our valued employees, it is unconscionable and unconstitutional to be mandated to provide, pay for, or promote services and procedures that directly contradict our deeply held religious beliefs."

Fighting the mandates is not an uncharted path altogether. The ruling in a case like 2014’s Burwell v. Hobby Lobby comes to mind: Faith-based Hobby Lobby made a clear case as to why it should not be forced by the Affordable Care Act to cover contraceptives in its employee health insurance plans, and the Supreme Court agreed. Many religious sects are opposed to contraception, as it intervenes with natural family planning dynamics.

While people agree on what contraception does — preventing pregnancy — there is enormous debate over the effects of “gender-affirming” sex-change surgeries and cross-sex hormones. Conservatives generally believe they are harmful, some progressives think they are helpful, and still others would suggest their effects depend on what procedure is done or at what age.

The fact that the Equal Employment Opportunity Commission is mandating any business, faith-based or not, to provide coverage of these surgeries and treatments is a willful misinterpretation of the definition of sex discrimination outlined in Title VII.

And the Department of Health and Human Services’ reinterpretation of “sex” in federal law to include gender identity — thereby forcing religious health care providers to physically perform or facilitate surgeries and procedures that conflict with their deeply-held beliefs — is wholly unconstitutional, even if the Biden Administration believes such procedures are necessary for a person’s well-being.

Furthermore, the Department of Health and Human Services’ mandate not only compels faith-based organizations to pay for these services but to “speak positively” about these procedures even if they disagree with them.

If employers fail to comply with these mandates, they face the loss of federal funding, the prospect of expensive and burdensome litigation, and in some cases, fines, criminal penalties, attorneys’ fees, and court costs.

Federal mandates have gone too far in recent years, and these are yet two more examples of such government overreach. Only this time, it involves a tricky, politically-charged subject with just the kind of nuance that could compel a judge to jump aboard the transgender transition train.

I hope it can be made clear that such transitions are not only harmful and unnecessary to the persons seeking them but that faith-based organizations should not be made to facilitate and provide coverage for such controversial procedures.