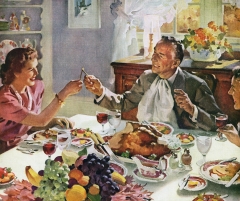 During three of our nation’s greatest times of crisis, three of our greatest Presidents, all featured on circulating United States coins, called on our nation to thank God, calling for a Day of Thanksgiving, which eventually became a national holiday in 1942.

On October 3, 1789, shortly after the Ratification of the Constitution and winning a unanimous vote as our first President, George Washington thanked God often in a short proclamation of Thanksgiving:

Whereas it is the duty of all Nations to acknowledge the providence of Almighty God, to obey his will, to be grateful for his benefits, and humbly to implore his protection and favor—and whereas both Houses of Congress have by their joint Committee requested me to recommend to the People of the United States a day of public thanksgiving and prayer to be observed by acknowledging with grateful hearts the many signal favors of Almighty God especially by affording them an opportunity peaceably to establish a form of government for their safety and happiness.

Now therefore I do recommend and assign Thursday the 26th day of November next to be devoted by the People of these States to the service of that great and glorious Being, who is the beneficent Author of all the good that was, that is, or that will be—That we may then all unite in rendering unto him our sincere and humble thanks—for his kind care and protection of the People of this Country previous to their becoming a Nation—for the signal and manifold mercies, and the favorable interpositions of his Providence which we experienced in the course and conclusion of the late war—for the great degree of tranquility, union, and plenty, which we have since enjoyed—for the peaceable and rational manner, in which we have been enabled to establish constitutions of government for our safety and happiness ….

It has pleased Almighty God to prolong our national life another year, defending us with His guardian care against unfriendly designs from abroad and vouchsafing to us in His mercy many and signal victories over the enemy, who is of our own household. It has also pleased our Heavenly Father to favor as well our citizens in their homes as our soldiers in their camps and our sailors on the rivers and seas with unusual health. He has largely augmented our free population by emancipation and by immigration, while He has opened to us new sources of wealth and has crowned the labor of our workingmen in every department of industry with abundant rewards. Moreover, He has been pleased to animate and inspire our minds and hearts with fortitude, courage, and resolution sufficient for the great trial of civil war into which we have been brought by our adherence as a nation to the cause of freedom and humanity, and to afford to us reasonable hopes of an ultimate and happy deliverance from all our dangers and afflictions:

Now, therefore, I, Abraham Lincoln, President of the United States, do hereby appoint and set apart the last Thursday in November next as a day which I desire to be observed by all my fellow citizens, wherever they may then be, as a day of thanksgiving and praise to Almighty God, the beneficent Creator and Ruler of the Universe. And I do further recommend to my fellow-citizens aforesaid that on that occasion they do reverently humble themselves in the dust and from thence offer up penitent and fervent prayers and supplications to the Great Disposer of Events for a return of the inestimable blessings of peace, union, and harmony throughout the land which it has pleased Him to assign as a dwelling place for ourselves and for our posterity throughout all generations.

In testimony whereof, I have hereunto set my hand and caused the seal of the United States to be affixed.

Done at the city of Washington, this 20th day of October, A.D. 1864, and of the Independence of the United States the eighty-ninth.

Almost a year after Pearl Harbor, when America was still struggling to emerge from the Great Depression and fight a full-scale World War on two fronts across two oceans, President Franklin D. Roosevelt permanently established Thanksgiving as a national holiday, beginning again with thanks to the Lord:

It is a good thing to give thanks unto the Lord. Across the uncertain ways of space and time our hearts echo those words, for the days are with us again when, at the gathering of the harvest, we solemnly express our dependence upon Almighty God.

The final months of this year, now almost spent, find our Republic and the Nations joined with it waging a battle on many fronts for the preservation of liberty.

In giving thanks for the greatest harvest in the history of our Nation, we who plant and reap can well resolve that in the year to come we will do all in our power to pass that milestone; for by our labors in the fields we can share some part of the sacrifice with our brothers and sons who wear the uniform of the United States.

It is fitting that we recall now the reverent words of George Washington, Almighty God, we make our earnest prayer that Thou wilt keep the United States in Thy holy Protection, and that every American in his own way lift his voice to heaven.

I recommend that all of us bear in mind this great Psalm:

The Lord is my shepherd; I shall not want.

He maketh me to lie down in green pastures: he leadeth me beside the still waters.

He restoreth my soul; he leadeth me in the paths of righteousness for his name's sake.

Yea, though I walk through the valley of the shadow of death, I will fear no evil: for thou art with me; thy rod and thy staff they comfort me.

Thou preparest a table before me in the presence of mine enemies: thou anointest my head with oil; my cup runneth

Surely goodness and mercy shall follow me all the days of my life: and I will dwell in the house of the Lord forever.

Inspired with faith and courage by these words, let us turn again to the work that confronts us in this time of national emergency: in the armed services and the merchant marine; in factories and offices; on farms and in the mines; on highways, railways, and airways; in other places of public service; and in our homes.

Now, Therefore, I, Franklin D. Roosevelt, President of the United States of America, do hereby invite the attention of the people to the joint resolution of Congress approved December 26, 1941, which designates the fourth Thursday in November of each year as Thanksgiving Day; and I request that both Thanksgiving Day, November 26, 1942, and New Year's Day, January 1, 1943, be observed in prayer, publicly and privately.