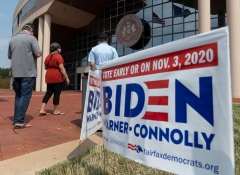 Voters wait in line to cast their ballot at an early voting location in Fairfax, Va. on Sept. 18, 2020. - Early in-person voting for the 2020 general election kicked off on Sept. 18, 2020 in Virginia. (Photo credit: ANDREW CABALLERO/REYNOLDS/AFP via Getty Images)

Last week, while on a business trip in Wisconsin, I learned about an insane ballot harvesting scheme that appears to be tied to a deep-pocketed left-wing advocacy group subsidized by Facebook founder Mark Zuckerberg, Google, the Rockefeller Brothers Fund, and eBay former chairman Pierre Omidyar's Democracy Fund.

"Last week on my radio program, we played Biden campaign ads," she told me. "They were all about something called 'Democracy in the Park.' It was an advertisement about how Madison, Wisconsin, would have 200 parks hosting ballot harvesting events." The ads were punctuated by a disclosure that they were "paid for by Joe Biden for President."

On Saturday, Sept. 26, as advertised by the Biden campaign, Madison poll workers turned out across the city to register voters and collect absentee ballots, even though in-person absentee ballot collection is not supposed to start until two weeks before Election Day, according to Wisconsin state election law. Several of McKenna's listeners showed up to photograph the city government workers' activities promoted by the Biden for President campaign.

The poll workers stuffed ballots into "red zipper bags with no security whatsoever. The poll workers witnessed people's [blank] ballots, just like you would if you did an in-person absentee ballot, threw them in the red zipper bags, and we don't know what's become of these ballots since," McKenna told me.

"It's clear from legal analysis: this is not legal and does not comport with Wisconsin election law," McKenna argues. "There's some serious questions about [Democratic] campaign coordination with the city of Madison."

Now, enter a shady entity called the "Center for Tech and Civic Life" (CTCL). It just so happens that this nonprofit "election reform advocacy group," based in Chicago and founded in 2012, has showered more than $6 million on the five largest cities in the crucial swing state of Wisconsin. In July, using COVID-19 as a pretext to boost mail-in and absentee voting, the center released the following amounts to governmental grantees:

According to the CTCL's website, they fielded over 1,100 applications from across the country for their purported "COVID-19 Response Grant Program" to "provide funding to U.S. local election offices to help ensure they have the critical resources they need to safely serve every voter in 2020." Grants are to be used to encourage alternatives to in-person voting, "voter education and outreach efforts," "early in-person voting," and vote by mail — all tactics being deployed by anti-Trump, "color revolutionary" forces to drag out the election long past Election Day.

There is nothing "nonpartisan" about this enterprise. The Center's top staff (many of them Barack Obama campaign tech gurus) come from a now-defunct left-wing nonprofit called the New Organizing Institute, whose far-left donors include George Soros's Open Society Foundation, the Ford Foundation, and Atlantic Philanthropies. CTCL director Tiana Epps-Johnson is a former Obama Foundation fellow. The center received $250 million from Facebook founder Mark Zuckerberg and his wife, Priscilla Chan. Trump-bashing Google is a top corporate partner. Other donors include the Rockefeller Brothers Fund and the Democracy Fund (founded by "Never Trumper" billionaire and eBay former chairman Pierre Omidyar).

McKenna warns that the alarm-raising "Democracy in the Park" scheme in CTCL-subsidized Madison, Wisc. will be back in action on Oct. 3. I reached out Monday to CTCL to confirm whether its grants are being used for the tote bag ballot-harvesting program touted by the Biden campaign. No reply. Maybe I'll get a reply to these questions:

If, as it plainly appears, private Big Tech and left-wing philanthropic funding are being used to rig the election process in the most important battlegrounds of our country, where the heck are the Justice Department and Attorney General Bill Barr?

Why haven't these dubiously collected ballots already been tracked down, segregated, and secured?

And finally: Is this what the "peaceful transfer of power" is supposed to look like in America?