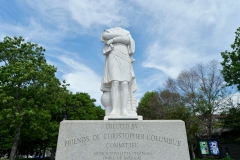 A decapitated statue of Christopher Columbus is viewed at Christopher Columbus Park in Boston, Mass. on June 10, 2020. The statue's head, damaged overnight, was recovered by the Boston Police Department, as a movement to remove statues commemorating slavers and colonizers continues to sweep across the U.S. (Photo credit: JOSEPH PREZIOSO/AFP via Getty Images)

Across our looted plain, statues are under siege.

In the name of social justice, we are witnessing the systematic eradication of history. Edifice vigilantes will not rest until all monuments of Western civilization fall.

It matters not whether the targets were guilty of the tired old charges of patriarchal oppression and institutional racism. It only matters that marble and granite tributes to dead white men be replaced with garish "Black Lives Matter" street murals and St. George Floyd altars.

The current president has forked over criminal justice reform, expanded the "Opportunity Zones" money pit, increased funding for historically black colleges and universities, and obsesses endlessly about the "black unemployment rate." At the urging of his pandering son-in-law, Jared Kushner, President Donald Trump is now promising to deliver left-wing "police reforms" first—instead of protecting law enforcement officers and their families in the crosshairs of violent Antifa and Black Lives Matter extremists.

But it's still not enough. The monuments must fall.

Here are just a few examples of the indiscriminate ignorance fueling the "Topple the Racists" movement here and abroad:

—In the heart of downtown Colorado Springs, an elegant statue of the city's founder was defaced last week with multiple "BLM" graffiti tags. General William Jackson Palmer was an extraordinary engineer, railroad builder, and philanthropist who fought for the Union in the Civil War as a 25-year-old cavalryman. He won a Medal of Honor for his leadership during a key battle in 1865. After moving to the Rockies and earning enormous wealth, he quietly gave half of his fortune away — including substantial donations to historically black Hampton University in Virginia, which was founded to educate freed slaves.

—In Denver, last week, agitators vandalized a 1909 monument standing outside the Capitol building with swastikas and "FTP" (f*ck the police) slogans. The statue depicts a Union soldier and honors Coloradans who fought and died in the Civil War.

—In the U.K., an anti-Trump outfit disseminated a hit list of statues that must be torn down, including one of former Prime Minister Earl Grey, who presided over the outlawing of slavery. The history erasers have already forced the University of Liverpool to rename its Gladstone Hall to remove reference to the former prime minister and Liberal Party leader William Gladstone. His father was a slave owner, so the monument police have decided that nothing else Gladstone achieved or espoused in four terms in office matters because he did not adequately renounce, disavow, and atone for the sins of his father.

So, should Confederate displays, colonial landmarks and slaveholders' visages be deep-sixed to assuage the #CancelAmerica culture? How do we confront past history if we dismantle it? How does pretending away an entire generation of Americans and their progeny promote "healing?" And where will it end?

Virginia's governor, Ralph "Blackface" Northram, announced plans to tear down the Robert E. Lee statue in Richmond, despite the commonwealth's legal guarantee in 1890 to hold the statue and pedestal "perpetually sacred to the monumental purpose" and to "faithfully guard it and affectionately protect it." A circuit court issued a 10-day injunction against the landmark's removal on Monday. But liberal lawyers are outraged that the law might actually, you know, matter.

"I am struggling to understand why the constitution [sic] doesn't *compel* the statue's removal," ACLU lawyer Matt Segal fumed on Twitter, "let alone permit its presence." Oh, and which country's constitution might that be, Segal?

A Texas Ranger statue was yanked from Love Field in Dallas. Jacksonville, Fla. is purging all Confederate monuments. NASCAR driver Bubba Wallace has declared his intent "to get rid of all Confederate flags." The National World War II monument was spray-painted with "Do Black Vets Count?" and the steps of the Lincoln Memorial were tagged with "Yall [sic] Not Tired Yet?"

Yes, I am tired. Tired of watching Americans apologize for their founders and fighters. Tired of thought police, speech police, and memorial police imposing 21st-century standards on public and private figures from two and three centuries ago. Tired of collective groveling that will buy no goodwill. Tired of ingrates who will not stop at "reimagining" America until there is no America left.

In the past, when once-mighty civilizations fell, their statues — like Ozymandias — outlasted them. Now, the barbarians destroy the monuments before time can erode them. What a "colossal Wreck" are we.