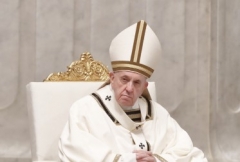 In reference to a document signed by Muslim Imam Ahmad Al-Tayyeb and Pope Francis that says the "diversity of religions" in the world is "willed by God," Archbishop Carlo Vigano, the former Vatican ambassador to the United States, said this idea is a "blatant heresy" and a "terrible blasphemy."

That specific teaching in the document has also been denounced by Cardinal Raymond Burke, an American, Bishop Athanasius Schneider of Kazakhstan, and numerous Christian scholars.

Archbishop Vigano is a highly respected diplomat who served as the Apostolic Nuncio to the United States from 2011 to 2016.  In 2018, Vigano publicly called on Pope Francis to resign for allegedly ignoring the homosexual abuse practices of Cardinal Theodore McCarrick.

The Pope has never addressed any of the facts presented in Vigano's testimony or denied Vigano's well-documented charges.

In a March 29 interview with The Remnant, a Catholic periodical, Vigano discussed the document, Human Fraternity, which was signed in Abu Dhabi last year by the imam and the Pope, and is often referred to as the Abu Dhabi declaration.

"In his Abu Dhabi declaration, Pope Francis said that God wants all religions," commented Archbishop Vigano.  "Not only is this a blatant heresy, it is also a very serious apostasy and a terrible blasphemy."

"Saying that God wants to be worshipped as something other than how He revealed Himself means that the Incarnation, Passion, Death and Resurrection of our Savior are completely meaningless," said Vigano.

"It means that the reason for founding the Church, the reason for which millions of holy Martyrs gave their lives, for which the Sacraments were instituted, along with the priesthood and the papacy itself, are all meaningless," he added.

In the document, it states, "The pluralism and the diversity of religions, colour, sex, race and language are willed by God in His wisdom, through which He created human beings. (Emphasis added.)

Cardinal Raymond Burke told the National Catholic Register that the statement in question “has to be removed from this accord because it’s not correct.”

As reported in The Register, Burke "noted that some have tried to justify it by saying that the Pope is referring to the permissive will of God: that other religions are an 'an evil that God permits.' But the cardinal argued that the document is not declaring this, but, instead, 'that the plurality or diversity of religions is good.'"

“That’s a mistaken notion,” said Cardinal Burke. “It’s certainly confusing for the faithful regarding salvation, which comes to us through Christ alone.”

In an August 2019 interview with LifeSiteNews.com, Auxiliary Bishop Athanasius Schneider said the teaching that God willed a diversity of religions "contradicts Divine Revelation, since God has revealed to us that He does not want diverse religions, but only the one religion, which He commanded in the First Commandment of the Decalogue: 'I am the Lord your God, who brought you out of the land of Egypt, out of the house of slavery. You shall have no other gods before me. You shall not make for yourself a graven image, or any likeness of anything that is in heaven above, or that is in the earth beneath, or that is in the water under the earth. You shall not bow down to them or serve them” (Ex 20:2-5)

"Our Lord Jesus Christ confirmed the perennial validity of this commandment saying: 'It is written, ‘You shall worship the Lord your God and him only shall you serve’ (Mt 4:10), said Bishop Schneider.

By implementing the Abu Dhabi declaration “men in the Church not only betray Jesus Christ as the only Savior of mankind and the necessity of His Church for eternal salvation, but also commit a great injustice and sin against love of neighbor," said the bishop.

Josef Seifert, an Austrian Catholic philosopher, told The Register, “How can God, who wants his disciples to go out and preach to the whole world and baptize them, have willed any Christian heresy, let alone religions that deny the faith of which Jesus says to Nicodemus that he who believes in him will be saved and he who does not will be damned (John 3:18)?”

The document turns God “into a relativist,” who does not care whether men “believe in truth or falsity," said Seifert. It “constitutes a total break with logic as well as with biblical and Church teaching.”

Because God is Truth, He does not will falsehood, He does not will error. Thus, the idea that God willed a "diversity of religions," a menu of errors, is a sly deception. It comes from a very different "father."