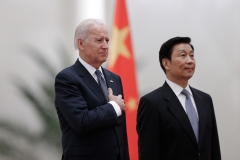 Chinese Vice President Li Yuanchao (R) and U.S. Vice President Joe Biden (L) listen to their national anthems during a welcoming ceremony inside the Great Hall of the People in Beijing on December 4, 2013. (Photo credit: LINTAO ZHANG/AFP via Getty Images)

Joe Biden is running away from his record as the “pro-China” candidate so quickly that his defenders in the liberal press can’t make heads nor tails of it. Ordinary Americans are equally confused.

Biden spent over three decades opening American markets to Chinese goods, ignoring China’s abhorrent human rights record, and dismissing the challenge posed by our greatest rival for global leadership. The “Made in China” era coincided with the closure of tens of thousands of American factories, stagnant working class wages, and the loss of America’s ability to produce essential goods domestically — a vulnerability that took on incredible significance when we learned that we were dependent upon China to produce the medical equipment needed to combat the coronavirus pandemic.

This disaster was facilitated by politicians of both parties, and no one was more gung ho than Joe Biden, poster child for the globalism that reigned supreme until the 2016 presidential election, which Donald J. Trump won by campaigning on a platform diametrically opposed to the “open markets and open borders” philosophy of the D.C. establishment. In the White House, President Trump became the first American leader in decades to take a firm stand against China’s malfeasance and demand a genuinely fair and reciprocal trade deal for American workers.

While Joe Biden was the vice president of the United States, conversely, he was downplaying the consequences of China’s rise — even as his own family tried to get rich through deals with Chinese state-owned companies.

How is it possible, then, that Biden has suddenly tried to recast himself as the “tough-on-China” candidate in the 2020 race?

Biden’s campaign even ran an ad claiming the President “rolled over for the Chinese” in response to the coronavirus that Beijing unleashed on the world. It’s one of the most poorly-executed flip-flops in American electoral history, coming just months after Biden called President Trump’s life-saving ban on most travel from China “hysterical xenophobia.”

Literally no one is buying it. Everyone knows about President Trump’s record of success in bringing China to the negotiating table through strategic counter-tariffs. The “Phase One” trade deal that was inked earlier this year represents the first major trade concessions from China in a generation. Even the fanatical free traders who actually liked Biden’s globalism see right through his new facade. The libertarians at the Cato Institute, for instance, published an article acknowledging that Biden’s reversal is “futile” and “inherently lacks credibility.”

Even the intellectual left is aghast at Biden’s fake toughness on China. The Atlantic called it “utter futility” and “pointless — even dangerous.” The New York Times published an op-ed all but begging Biden to drop the act.

If even his own supporters are rolling their eyes at Biden play-acting as a China skeptic, why are he and his team even bothering to attempt the deception?

The answer is simple. Americans have finally woken up to the economic and national security threat posed by China. The coronavirus pandemic made that threat impossible to ignore. No one wants to go into this November as the “pro-Beijing” candidate.

Unfortunately for Joe Biden, he’s been the “pro-Beijing” candidate throughout his political career, and there’s a decades-long record to prove it.

Ken Blackwell served as mayor of Cincinnati, Ohio Treasurer, a U.S. Ambassador to the UN; he currently serves on the board of directors for Club For Growth.