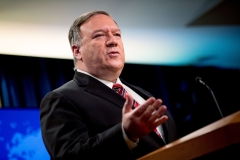 Former U.S. Secretary of State Mike Pompeo's presence at the headquarters of the largest Iranian opposition movement Monday marked a significant moment in U.S.-Iran policy. Its impact on the strategic U.S. outlook toward Iran may be indirect or momentarily hazy, but its historic connotation will be neither short-lived nor inconsequential. It has the potential to persuade a shift in focus to an American policy orientation that has been dangerously discounted for far too long.

In November 2019, Iran was shocked by the most unprecedented nationwide protests in its history. In January 2020, the Supreme Leader, Ali Khamenei, delivered a major public speech, in which he blamed the main opposition Mujahedin-e Khalq (MEK) for organizing the protests. This is a critical point that Western policymakers ignore.

Incidentally, several days before the uprising, former U.S. national security advisor to President Obama, General James Jones, had paid a visit to Ashraf-3, the MEK's home in Albania. Khamenei publicly pointed to that visit in his speech, saying, "Several days before the riots, in a small and sinister European country [Albania], an American [General Jones] joined some Iranians [MEK] and planned the crisis."

Khamenei remains deathly afraid of the MEK. Ironically, however, his ministry of intelligence has painted the movement in its official propaganda as a marginalized "cult" that does not enjoy public backing. Some American journalists uncritically relay the same narrative.

On Monday, the most senior American official to date, a Secretary of State in the previous administration, visited Ashraf-3 and met with Maryam Rajavi, the President-elect of the National Council of Resistance of Iran (NCRI), in which the MEK is the main component.

The visit is meaningful for several reasons. Every time the movement attracts growing international recognition, the regime reacts with a mix of fury and fear. Over the past two decades, the MEK and the NCRI have been recognized by international luminaries, lawmakers, human rights defenders, policy experts, top officials, and thousands of parliamentarians on both sides of the Atlantic for their genuine struggle for democracy and freedom in Iran.

Horrified, the regime tried to bomb the NCRI’s international gathering in Paris in June 2018. Recently, a Belgian court found an Iranian regime diplomat and three accomplices guilty of conspiring to bomb the Free Iran rally in 2018.

For the past few years, the regime has become even more sensitive to the MEK as an existential threat and the only alternative to its decaying rule. First, the MEK's Resistance Units have expanded the scope and depth of their activities, leading anti-regime activities in hundreds of cities and organizing nationwide protests. Second, the MEK has led an elaborate international movement to bring the major culprits of the regime to account for their crimes against humanity and genocide in 1988.

In that year, at least 30,000 political prisoners, 90% of whom were MEK members and supporters, were brutally massacred for their political and religious beliefs on the orders of former Supreme Leader and regime founder Khomeini. Their bodies were dumped in secret mass graves located across the country. Amnesty International has called it a crime against humanity while United Nations officials and rapporteurs have demanded an independent international inquiry into the killings. Notably, the regime's current president, Ebrahim Raisi, was involved as a key executioner.

Dozens of MEK witnesses have testified in Sweden against a former Iranian regime official involved in the 1988 massacre. A ruling is expected this year, which will have a lasting consequence for the regime internationally and domestically.

In these circumstances, Pompeo's visit lends further credence to the argument that the Iranian opposition led by the MEK is gaining ground while the regime is clearly on the brink. It points to the MEK's startling staying power against all odds. It shows that the organization is here to stay, and that major policy experts consider it as a serious alternative to the regime. A former U.S. Secretary of State does not play dice on such a critical issue that generates the regime's permanent wrath. This is especially noteworthy as U.S. authorities are actively protecting Pompeo after receiving credible threats by the regime against his life.

Pompeo's visit to Ashraf-3 also serves as a guideline for the most pragmatic and appropriate policy toward Iran. This policy should reject appeasing the regime while siding with the Iranian people. The Ukrainian example should serve as a model. Appeasing dictators produces potent dangers to international peace and security. A resilient people and opposition have a chance against dictators. Ukraine has shown that regardless of size, a determined opposition can be a serious and formidable opponent against some of the world's largest powers.

The MEK's message and history gives a similar flavor. The Iranian people have a chance to win against the ruling theocracy. The Iranian people have not resigned to a future dominated by dictatorship. They want freedom and democracy and they are paying the requisite price for it. Pompeo's visit shows that the international community should support the MEK in its plight. The policy orientation is as clear as it is noble: Instead of appeasing the regime, stand with the Iranian people and their organized opposition in their quest for a free, secular, democratic, and non-nuclear Iran.