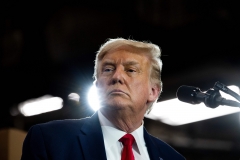 President Trump’s recent visit to Clyde, Ohio is a symbol of hope for manufacturers all over the country who had been forgotten by the Washington, D.C. establishment for decades until the current administration took office.

Prior to Donald Trump's stop at the city’s Whirlpool manufacturing plant, no U.S. president had set foot in Sandusky County for more than a century. Much like Ohio’s manufacturing sector, the region was sorely neglected by the political elites, who cared more about maximizing America’s GDP than they did about the lives and livelihoods of millions of American workers.

Everything changed with the election of Donald J. Trump, who has kept his promise to rebuild American manufacturing as part of his plan to Make America Great Again.

“The state of Ohio has lost one in three manufacturing jobs since NAFTA,” he continued, vowing to pursue a new trade policy that would put Ohio workers first.

As he reminded the workers in Clyde, that’s exactly what he’s done.

First, the president imposed strategic counter-tariffs on bad actors such as China to combat the effects of illegal and abusive trade practices that previously put companies like Whirlpool at an unfair disadvantage. As a direct result of this effort, Whirlpool was able to expand its operations and add 200 local jobs at its facility in Clyde.

“Under the last administration, the men and women at Whirlpool saw their jobs and factories targeted for destruction,” the president said during his visit, noting that the Obama-Biden administration did nothing to stop the assault on Ohio manufacturers. “Under my administration, all of that has changed.”

Of course, Whirlpool is just one of many success stories that have been made possible by the Trump administration’s pro-growth economic policies. In July alone, several major manufacturers announced their own plans to expand operations in the Buckeye State, investing millions of dollars in local communities and creating hundreds of new jobs across the state.

Advanced manufacturer Dorel Home, for instance, recently decided to invest nearly $3.3 million in its Tiffin facility, creating 87 new jobs. Shutterfly, meanwhile, is investing a whopping $23.2 million on upgrades in its Crawford County plant. International Cushioning Company, a commercial packaging manufacturer, is slated to spend $3.6 million on a new facility in the state, as well.

There will be more success stories to come, because President Trump will never stop fighting for American manufacturers. Just recently, the White House took bold steps to ensure that companies don’t displace American workers by abusing H-1B visas, ensuring that Americans will be first in line for the millions of jobs that are already being created by our “V-shaped” post-pandemic economic recovery.

The president is also seizing this opportunity to cut America’s reliance on foreign supply chains — a dependence that had tragic consequences during the coronavirus pandemic — and just announced a directive to ensure that essential medicines are produced in the U.S. from here on out.

The record is crystal clear — no other president has done more to strengthen Ohio manufacturers than Donald Trump. The future of our state is brighter than ever before.

Ken Blackwell served as the mayor of Cincinnati, Ohio, the Ohio State Treasurer, and Ohio Secretary of State. He currently serves on the board of directors for Club for Growth and National Taxpayers Union.