School Choice Is Driving Entrepreneurship in Education and the Workforce 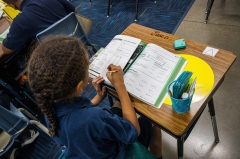 Education savings accounts continue to change the way Arizona families think about their child’s K-12 school experience, despite Gov. Katie Hobbs’ threats to cut the program. Over the last year, the accounts have also changed the way businesses and entrepreneurs think about education, too.

So if Gov. Hobbs is as interested in jobs as she indicated in her inaugural address, she could take a moment during this week’s annual celebration of choices in education, National School Choice Week, and consider how entrepreneurs are using the accounts in Arizona and around the country to reevaluate her position.

In her state of the state speech, Gov. Hobbs said that “one thing that is not complicated is that the easiest way to change someone’s life is to offer them the opportunity for a new or better job.” Gov. Hobbs should know that the keyword here is opportunity, something entrepreneurs of all kinds know how to create.

To wit: Ken Zevenbergen developed a brain tumor that affected the way his brain processed mathematics, so he turned to his woodworking skills and opened a school to teach young people.

“All of a sudden, people started coming,” Ken says in a video created by Love Your School. “We get calls every day.”

His school enrolled 41 students last year and now has another 140 on the waiting list. Parents have the option to use their child’s account for schools like Ken’s, along with purchasing textbooks, hiring personal tutors and education therapists, and choosing from other learning services. Families can even customize their child’s elementary and secondary school experience using the accounts.

Parents are clearly not intimidated by the volume of new choices that the accounts make available to them. More than 45,000 Arizona students are benefitting from the accounts today, a 1,770 percent increase from the 2015-2016 school year. Another 65,800 students are participating in Florida and still more students are using similar accounts in North Carolina, Mississippi, New Hampshire, Indiana, Tennessee, and Missouri.

Like parents, smart executives know an innovative opportunity when they see one. Last summer, venture capitalists invested in the micro-school creator Prenda so that the company could open their small learning communities of 10 students or fewer for West Virginia families, another state that just began offering students access to education savings accounts.

State lawmakers approved a proposal to allow for the creation of micro-schools and learning pods in 2022, making West Virginia a welcoming place for Prenda’s services. West Virginia lawmakers are considering a proposal now that would make sure parents can use education savings accounts to pay tuition and other costs for their children in micro-schools. Earlier this month, West Virginia officials activated the first accounts in the state for the nearly 2,000 students who were approved.

In her speech, Arizona’s Gov. Hobbs asked legislators to send her “solutions” to make sure public schools “have the resources they need.” Sending traditional schools more taxpayer money is not a solution, nor entrepreneurial—it’s the same thing bureaucrats have done for decades. In fact, Arizona’s auditor general reports that Arizona districts and charter schools have only spent half of the $4.6 billion in federal taxpayer spending allotted to them as part of COVID-19 relief packages.

Remember, this is money Washington began sending schools two years ago to make sure educators could meet emergency needs during the pandemic. Per-student spending is up in Arizona, yet the share of each education dollar spent in the classroom is still hovering around half (55 percent, lower than the same figure from 2001), which means schools are still spending almost 50 cents of every taxpayer dollar meant for education outside of the classroom.

It’s nearly impossible for taxpayers to follow a dollar as it cycles through an education formula. Meanwhile, parents using education savings accounts know exactly how each dollar is being used—because they are the ones spending the money.

The accounts create more opportunities in education, enhance transparency, and attract innovation. As part of National School Choice Week, celebrating education savings accounts sounds like a celebration of entrepreneurship in education and the workforce.

Courtesy of The Heritage Foundation.