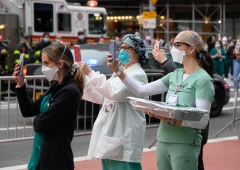 Medical workers occupied much of the spotlight during the coronavirus pandemic. (Photo credit: Noam Galai/Getty Images)

One thing many will remember about the coronavirus crisis of 2020 is that it happened during a radiant spring. Everywhere people tell of noticing the budding trees, the loud symphony of birds, and enjoying beautiful weather and sunshine.  In some way, the spring provided some solace amid the crisis.

Most cannot say if the spring of 2020 was any more dazzling than others that came earlier. The difference is that people noticed this spring. There was time to see more. The unsettling silence of lockdown allowed people to listen more. Things slowed down, and people could ponder what they had never absorbed before. Circumstances forced them to observe what they used to ignore. Thus, a stunning spring came alive.

This noticing of things had similar social consequences. People also speak about the deepening of family relationships. The lockdown did force people together. The presence of an outside threat created conditions for forging stronger family ties. For some families, not all, this time represented a period of restoration. Indeed, the family bond survived the demands of lockdown. Inside it, there is no need for social distancing since the unit is by its nature intimate and resistant.

The home also took on a greater significance. For a shining moment, it became more than just a place to eat and sleep inside a busy work schedule. The home once more reigned as the place of social conviviality where all, young and old, might gather. Many young people returned home, which is a natural place of shelter in times of crisis.

Finally, the uncertainty of the future turned many minds to God. Even with the absence of Church services, they prayed. Overwhelmed by the crisis, people sensed their contingency and turned to God.  In the silence of lockdown, some used this occasion to mend their relationships with God or asked existential questions leading in His direction. Others even saw the crisis as a wake-up call to amend their lives.

However, it would be wrong to remember the dazzling spring of 2020 as only a time of solace and joy.

It was also a time of great tragedy. Death visited the nation, and the threat of death generated fears that permeated all society. Economic uncertainty devastated everything. Stress and anxiety increased as the tensions of living in close quarters also had a negative impact.

Indeed, spring 2020 will be remembered as the time when society stopped. Humans are social beings that instinctively seek out others so that together they might prosper. Thus, families look for intermediary social units related to communities, workplaces, and faith that provide vital support in times of crisis.

Most intermediary bodies were locked down. Essential human contacts and affections were reduced to live-streamed substitutes that can never satisfy. Thus, most suffered from the pain of not having other social units outside the family available to buttress them in this time when they were most needed.

The anti-social nature of the virus favored a distancing that was more than physical. It was indeed a social distancing since each felt the other represented a potential health threat and was, therefore, to be avoided.

When society stops, it causes destruction. All those intensely human and social outlets—stores, cafés, schools and cultural establishments—have no other means to survive, save through intercourse with others. This crisis cut them off from the air they breathe. The longer the lockdown, the more serious the damage was. Many of these outlets suffocated to death and are now irremediably lost.

The most painful lockdown of an intermediary association was that of the Church. The faithful were cut off from the sacraments that are the means to sanctify and achieve union with God. It was as if God was quarantined since none could visit His house. Many will remember the spring of 2020 as the time when they were not allowed to see a sanctuary lamp.

The Power of the State

Without intermediary social units to act as buffers, the individual is exposed fully to the only society left outside the family—the State. The lockdown subjected individuals to the coercive power of the State. While such powers are needed in times of emergency, the spring of 2020 saw draconian measures that caused confusion, hardship, and chaos.

The intermediary associations that normally mediate the powers of the State and make them more human were locked down. Thus, the State’s action appeared more inhuman, imposing and even capricious.

The omnipotent State moved into the social vacuum left behind by the locked-down institutions. The stimulus packages, benefits and subsidies turned the State into the solution to all problems. The State recklessly borrowed trillions of dollars against the future and threatens to borrow trillions more to make itself the central power that will take on an ever more dominant and dangerous role in the private lives of millions. Massive plans by the State are in place to invade the private lives of individuals in the name of public health and safety.

The Calm Before the Storm

The spring of 2020 will thus be remembered as a time of calm before the storm. The great crisis did not strike America and the world in a single devastating blow that immediately immersed everything in misery. Everything is now in suspended animation, while the shock of what happened sinks in.

Savings, stimulus packages, and safety nets provided a cushion to mitigate the effects of this immense crisis over the spring. However, with tens of millions unemployed and bankruptcies multiplying, the scenario will rival the Great Depression. When the stimulus checks and subsidies inevitably end, people will start feeling the pain.

Meanwhile, the virus threatens to return. Racial violence flares. International tensions increased. Elections loom in a polarized America. As the nation enters an uncertain future, remember those calm moments of the spring of 2020 when family and faith provided solace. Those same pillars will be vital in the approaching winter of discontent.