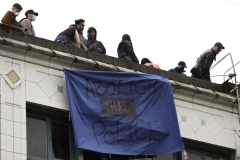 A banner which reads "abolish the police" hangs from a building in an area being called the Capitol Hill Autonomous Zone (CHAZ). (Photo credit: JASON REDMOND/AFP via Getty Images)

When Antifa and other groups’ militants took over a six-block section of Seattle’s Capitol Hill precinct, the liberal media treated the occupation lightheartedly.

They portrayed the action as a way protesters with limited resources can garner attention from an oppressive establishment. Many conservatives assume that the Capitol Hill Autonomous Zone (CHAZ) will end up something like the ill-fated Occupy Wall Street movement. The occupants have already changed the name to CHOP, which means Capitol Hill Organized Protest. Others think the crazy mixed-up group of grown-up children will soon tire of their games and leave when the trash piles up and the going gets tough.

Regardless of what it calls itself, there is a difference this time around. These are not crazy mixed-up children. They are revolutionaries with guns and an agenda. They also have unlimited media coverage that extends their influence far beyond their paltry numbers.

Thus, there are three reasons why the CHAZ insurrection in Seattle must be taken very seriously.

Not Protesters but Violent Revolutionaries

The first reason why CHAZ is dangerous is that its members are violent revolutionaries that are introducing their version of class struggle to copycats across the nation. This is not civil disobedience, but a deliberate effort to remove portions of America from the rule of law.

These violent players have proven their intentions by pelting police with rocks, bricks, bottles, and even primitive explosives. Even now, they hinder police from responding to emergency calls in their “occupied” area, thus endangering further the population they have hijacked. Humoring them with legitimacy will only encourage them to spread.

The only way to fight against these violent actors is to deprive them of their stage.

The second reason why the zone must be taken seriously is what it represents.

The role of these revolutionaries is not to overthrow the American government. They serve to propose radical goals that will mesmerize the public and facilitate the movement of all society, especially the moderates, toward a revolutionary target. By presenting a radical objective, they make slightly less radical proposals seem more reasonable. The extremism of CHAZ activists casts the Green New Deal in a better light. CHAZ helps it come across to moderates as the lesser evil. These centrists are always willing to surrender a little to avoid losing all.

The CHAZ wish list is an outrageous collection of impossible demands: Free benefits, no jails, dismantled police, eco-friendly policies, and citizenship for the country’s estimated 22 million illegal aliens. Its revolutionaries unite pro-abortionists, LGBT activists, socialists, and every other leftist cause hostile to Christian morality. They are dangerous because of the radical goal they represent.

CHAZ is also dangerous because the setting up of an autonomous zone is a symbolic action. Symbols have always been a powerful part of the revolutionary message. Like a giant loudspeaker, the existence of a “liberated” territory—however small—symbolizing the Marxist utopia of imposed “fraternity and love” projects the revolutionaries’ voice and influence far beyond their insignificant numbers. It creates a template that might easily spread to other places.  The only serious way for authorities to fight against this revolution is to deprive it of its symbols. It is then reduced to its real insignificance.

The Greatest Danger: the Liberal Establishment

The final reason why CHAZ must be taken seriously is the most important. The greatest concern of the whole episode is not the militants. If given permission, any police force would take care of this motley group of radicals without major difficulty.

The most dangerous element in the CHAZ development is the liberal establishment. It facilitates and legitimizes the actions of the leftist militants. Without the criminal complicity of authorities (dereliction of duty) and the propaganda blitz from liberal media, efforts like CHAZ would be doomed to fail. However, with support from establishment figures, the most audacious and outlandish things can be accomplished.

For example, CHAZ enjoys the support of Seattle mayor Jenny Durkan, who compared the occupation to a “block party” that might extend to become another “summer of love!” She ordered the police to stand down. She provides basic sanitation and other services that keep the zone functioning at taxpayers’ expense. To show her groveling support, she has pledged to spend $100 million on minority communities. She has established a community-led Black Commission.

The mayor is joined by the State’s governor, celebrities, and other key liberal figures. This kowtowing is the main strength of the CHAZ movement, not its anarchists and allied activists.

The Policies of Surrender

Thus, liberals following a policy of surrender are the greatest danger to the nation. Media that favorably portray these anarchic experiments are also more dangerous than the insurrectionists are. Both convey legitimacy upon the lawbreakers. Both help spread the class struggle narrative that has caused so much misery around the world.

The most efficient way to end the experiment is to denounce and expose these facilitators. They are always found in revolutions surrendering far more than what revolutionaries demand. Ironically, their heads are typically the first to roll when, thanks to their weaknesses, revolutions succeed.

The people’s republic of CHAZ is dangerous and deadly. Americans treat it lightly at their own risk.

John Horvat II is a scholar, researcher, educator, international speaker, and author of the book "Return to Order," as well as the author of hundreds of published articles. He lives in Spring Grove, Pennsylvania where he is the vice president of the American Society for the Defense of Tradition, Family and Property.