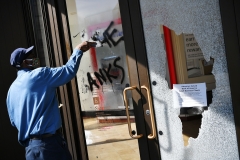 In the face of the recent riots, many try to distinguish between protesters and the “radical elements” who riot. The former are always good and even patriotic. The latter are lamentable and perhaps criminal.

In the words of Gen. James Mattis, the riots are the work of “a small number of lawbreakers” that detract from the overall quest for justice.

The general, who is a scholar, should know better.

When protests that turn into riots happen everywhere at the same time, using similar tactics and slogans, it is not the work of a small number of lawbreakers. When pallets of bricks allegedly appear near places of looting, this is not the work of random opportunists. When the bailed-out rioters enjoy the universal support of the liberal media, politicians, celebrities, business leaders, and clergy, something bigger is at play.

This now-worldwide effort is guided by those who know how to direct and articulate events toward a determined goal. These riots are not spontaneous or random. Things like this need organization, thought, and narrative. Riots need riot-makers.

Of course, most protesters are not riot-makers. Many just want to manifest their anger over the death of George Floyd.  However, when violent groups turn peaceful protests into riots, the riot-makers use the cover and momentum of the protesters to advance their violent class struggle narrative.

Likewise, not all riot-makers participate in the riots, but they, above all, facilitate them. The final goal is to give the impression that everyone supports their struggle. When protesters fail to condemn rioters, they allow this impression to prevail.

Thus, protesters should immediately condemn and disassociate themselves from the violence. There is nothing patriotic about the wanton destruction of property that has ruined the lives of thousands of Americans. Indeed, the life of George Floyd is not worth intrinsically more than the life of David Dorn, the black ex-police captain murdered by rioters in St. Louis. Do not all black lives matter? Why is one mourned, and the other ignored?

A Need for Violence

However, riot-makers see the situation differently. They need violence because they are writing the narrative that everyone is following. It is the same tired narrative of the left that history is an eternal struggle between the exploiters and the exploited. Rioter-makers do not want social harmony, since it impedes the advance of the revolutionary process that they think will assure them of victory.

The radical left has capitalized on the riots to foment class struggle on a mass scale. Indeed, all the familiar characters in this drama remain the same. Pro-abortionists, LGBT activists, socialists, feminists, and even Satanists join ranks in this revolution against the established order.

Framing the Debate as a Systemic Crisis

This struggle explains why the riot-makers inside the left, the media, and the liberal establishment frame this crisis as a “systemic” crisis. They know that a systemic crisis can only be changed by bringing down the system. They can claim that violence is the only way rioters can express their helplessness in the face of the massive system that oppresses them.

In a systemic crisis, there can be no solutions to the very real and concrete problems. The riot-makers make impossible demands that they know have no solutions inside the present system.  When the riot-makers take control, the “offending” class can never change enough to suit them. They rule with cruel tyranny over actions and even thoughts.

The only thing accepted by the riot-makers is concessions and submission. The established order must invent the concessions it will make to facilitate its self-destruction. Everyone must apologize and surrender. Thus, city governments voluntarily offer to defund or even abolish their police. They tie the hands of their officers while rioters attack and kill these brave defenders of the thin blue line. Civil and business leaders trip over each other in seeing who can surrender the most in this macabre dance toward society’s dissolution.

Moreover, the riot-makers see violence as a means to accelerate change. If the object of their revolution is to destroy the established order, it must be physically threatened to scare the comfortable bourgeois to concede. Riots fast-forward so-called historical processes and avoid the ugly defeats suffered through slower democratic processes.

Framing the debate as a systemic crisis allows the riot-makers to avoid anyone raising moral questions about their action. A systemic crisis absolves people of personal responsibility and free will since they insist the system determines how people behave.

It also hides the real problem. Indeed, it is much greater than racism, which is only a consequence. This problem is a moral crisis of massive proportions that is tearing America apart. This crisis happened because modern society developed styles of life that teach individuals not to assume moral responsibility for their actions. It created conditions whereby people became slaves to their unbridled passions. The result is a sinful society that becomes ever more disordered.

In the present war against order, the riot-makers now fight with increased rage against the remnants of the natural moral law that seeks to restrain them—even if only by fallible police. They want their bricks to bring down the present decadent system, full of family, cultural, and even economic institutions that remind people of the Christian order that still survives in these times. The most radical riot-makers rage against God and His Law.

For this reason, the left seeks to avoid addressing the moral dimension. A moral worldview assumes human freedom and makes harmonious change possible. Moral law proposes solutions that work in union with human nature, not against it. Christian charity works toward ordering society and helping the needy.

When the issue is framed in moral terms, as it should be, the riot-makers will always lose. They avoid this. They fear the moral reawakening of an America that will call upon God and seal their defeat.