Steve Scalise Is Right: 'Red Flag' Laws Are the Wrong Way to Go 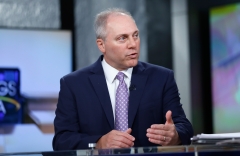 Five years ago, on June 14, Louisiana Republican Congressman Steve Scalise was shot and almost killed by a left-wing Bernie Sanders supporter fueled by rage against Republicans. In an early morning attack at a baseball diamond, as more than a dozen Republican members of Congress practiced for an upcoming charity game, Scalise was one of four victims shot. Yet today, ask Scalise what he thinks about the demand for so-called “red flag” laws in the wake of recent mass shootings, and he’ll tell you he strongly opposes them. Why? Because taking away someone’s firearms without due process, in his words, “happens to be unconstitutional.”

He’s right, of course. “Red flag” laws violate due process. Moreover, they reverse the presumption of innocence until proven guilty and turn it into “guilty until proven innocent.”

The man who shot Scalise, James Thomas Hodgkinson, was 66 years old at the time of his attack. He was severely wounded by police officers during the course of what became an exchange of gunfire, and succumbed to his injuries at the hospital later that day.

Hodgkinson had traveled from his home in Belleville, Ill. all the way to Alexandria, Va., just across the river from Washington, D.C. to carry out his attack.

Scalise required multiple surgeries, six weeks in the hospital, and years of recovery.

Surely, if any political leader in Congress today is fit to address the question of proposals seeking to take guns out of the hands of potential mass shooters before they can commit their crimes, Scalise is that leader.

Speaking on FOX News Sunday last weekend, in the wake of the recent mass shootings in Buffalo and Uvalde, Scalise addressed these so-called “red flag” laws – already in place in 19 states and the District of Columbia – that allow authorities to seize firearms from gun owners deemed a threat, even before the firearm owner commits a crime, without the firearm owner being given the benefit of a trial, or a hearing, or a lawyer, or even, in many cases, simple notification that he or she is about to lose his or her right to possess a firearm.

“They take away due process, where they literally can come into your house and take away your gun without you even knowing that there was some kind of proceeding where somebody said, ‘Oh, I think that guy might a be a threat,’ so now somebody can go take away your constitutional right.” Scalise said. “Maybe somebody thought taking a gun away from a 19-year-old is going to solve a problem. It happens to be unconstitutional.”

What’s worse than the fact that many states already have these laws in place is that just a few days ago, a bipartisan group of senators announced a framework agreement that incentivizes the remaining states to adopt their own “red flag” laws.

These laws are written far too broadly.

“Depending upon the state,” wrote Congressman Thomas Massie (R-KY) and violent crime expert John R. Lott, Jr., “anyone from a family member, intimate partner, or ex to house- or apartment-mates or a police officer can file a complaint.”

But wait, it gets worse (if you can believe it).

“Under Colorado’s recent law,” they continue, “anyone at all can make a phone call to the police. They don’t even have to be living in the state. There is no hearing. All the judge has before him is the statement of concern.”

The possibilities for abuse are many. A jilted lover, an angry former business partner, even a domestic abuser seeking to disarm a potential victim – with no penalty for filing a false complaint, what’s to prevent such abuse?

Perhaps worst of all, Lott’s research shows that the laws simply don’t do what their supporters claim:

“Red flag laws,” he writes with Carlisle Moody of the College of William and Mary after a study looking at data from 1970-2017, “had no significant effect on murder, suicide, the number of people killed in mass public shootings, robbery, aggravated assault, or burglary.…These laws apparently do not save lives.”

Scalise is right. “Red flag” laws don’t work to prevent violent crime, and they cost us our God-given rights. That sounds exactly like what I would expect from a Democrat-controlled Congress.