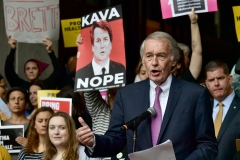 U.S. Sen. Ed Markey (D-MA), who has called for nixing the filibuster and expanding the Supreme Court, speaks at Boston City Hall to protest the nomination of Brett Kavanaugh to the U.S. Supreme Court. (Photo credit: Paul Marotta/Getty Images)

Rule Number One in hostage negotiations: It does absolutely no good to threaten to kill hostages you’ve already killed.

Someone should remind Senate Minority Leader Chuck Schumer and his colleagues of that. As they’ve reacted to news of Supreme Court Justice Ruth Bader Ginsburg’s passing and President Trump’s nomination of Judge Amy Coney Barrett to fill Ginsburg’s seat, Schumer and his colleagues have been running around like inmates at an asylum, screaming to the rafters of the consequences to come if the president and Senate majority do what the Constitution mandates that they do.

In the past week, we’ve heard leading Democrats threaten the following potential consequences if Republicans move forward with Judge Barrett’s nomination before Joe Biden is sworn in as president:

In fact, that’s the point – nothing Democrat leaders are threatening now as a “You’d better not try to fill that vacancy, or else!” is anything they haven’t already told us is on their agenda if there should happen to be a Biden Administration working with a Democrat-controlled Senate as a consequence of the November election results.

In other words, these are not really threats. They are promises.

If Joe Biden wins the White House, and Senate Democrats recapture the majority in the upper chamber, they will engage in efforts to achieve a kind of “fundamental transformation of America” that the Obama Administration could not even in its wildest dreams have imagined.