Post-Dobbs Is the Time to Save Nine 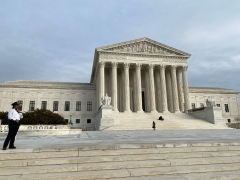 The radical left is about to make another pass at packing the Supreme Court. For those of us committed to protecting the constitutional framework our Founding Fathers left us, it’s time to gird for battle.

At issue is the upcoming Supreme Court ruling in the case of Dobbs v. Jackson Women’s Health Organization, in which the state of Mississippi is asking the court to uphold its state law banning abortion after 15 weeks – and also to overturn the 1973 Roe v. Wade ruling that struck down state-level prohibitions against abortion.

When the court heard the oral arguments in the Dobbs case in December, pro-abortion protesters demonstrated outside the building. Speaking of a potential renewed push to pack the court by expanding the number of justices from nine to 13 or possibly even more – which would make possible the appointment of four or possibly even more new justices by President Biden, to tilt the ideological balance of the court back to the left – Brian Fallon, executive director of the progressive group Demand Justice (and a former senior campaign aide to Hillary Clinton’s 2016 presidential campaign), said “This push will go into hyperdrive if the court upholds Mississippi’s ban, let alone overturns Roe outright.”

This, of course, is the exact opposite of what the Founders intended when they created our government, with the three main functions of government – executive, legislative, and judicial – deliberately separated.

They knew that the power to make laws is a very dangerous power. So the two branches of government that play a role in making law, the legislative and the executive, are held accountable to the people by means of regular elections.

The judicial branch of government, on the other hand, is deliberately insulated from politics, as much as it can be. That’s why judges are not elected – they are appointed by the president, and confirmed by the Senate. Once they are sworn in, they are there for life terms, as long as they don’t commit impeachable offenses.

This was the Founders’ solution, to enhance the opportunity for judges to decide cases and issue rulings without taking into account political considerations. As Utah Sen. Mike Lee writes in his new book, “Saving Nine: The Fight Against the Left’s Audacious Plan to Pack the Supreme Court and Destroy American Liberty,” “within the judicial branch, insulation from accountability was an essential design feature, not a bug.”

The only reason the radical left wants to pack the court is because the court’s current composition is not to the radical left’s liking, and is issuing rulings with which the radical left disagrees vehemently. If that sounds suspiciously like a child demanding an after-the-fact rewrite of the rules of the game he just lost, it should.

The number of justices on the Supreme Court has been set by statute at nine since the Judiciary Act of 1869 was enacted.

In more than 150 years, there’s been only one serious attempt to change the number of justices on the court. That occurred in 1937, when President Franklin Roosevelt – just reelected in the most overwhelming reelection victory seen in the republic to that time – believed he had the political muscle to recast the shape of a court that had frustrated him for years by overturning his New Deal programs as unconstitutional overreach.

When Roosevelt attempted to add as many as six new justices to the court, his own Democrat Party controlled the Senate by a margin of 76-16. Think of that: In a Senate that didn’t even have 100 members yet, his party had a 60-vote majority.

But even that large majority couldn’t swallow it. In just 168 days, after (and as a result of) a massive public debate, public opinion turned so hard against Roosevelt that when the Senate held the vote he insisted on, the body voted by a margin of 70-20 to kill his effort.

Today’s public is no different. A May Mason-Dixon survey, commissioned by the First Liberty Institute, asked 1,100 registered voters, “Do you support or oppose amending the U.S. Constitution to change the structure of the U.S. Supreme Court?” Fully 64 percent said they oppose it, while 26 percent said they supported it, with 10 percent undecided.

Another question asked, “For over 150 years, the United States Supreme Court has had nine justices. ‘Court-packing’ is generally defined as increasing the number of Supreme Court seats, primarily to alter the ideological balance of the court. Do you support or oppose ‘court-packing’?” Again, 65 percent said they opposed it, 24 percent supported it, and 11 percent were undecided.

The public opposes it. The Founders would have opposed it. We should all oppose it. And if the radical left rallies to another effort to pack the court, we shall.