From Pandemic to Court Packing, When Will Harris' Non-Answers End? 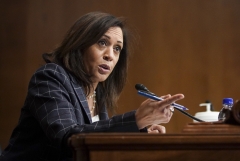 Wednesday night, the nation watched as Vice President Mike Pence and Sen. Kamala Harris met in their one and only encounter. With the tops of the tickets at 74 and 77 years of age, respectively – and, consequently, a greater than usual chance that the next vice president could wind up thrust into the presidency in the next four years – this year’s exercise was, truly, one of the most consequential vice presidential debates ever.

So, what did viewers see? They saw Pence perform as he did in his debate four years ago against Virginia Sen. Tim Kaine. Wednesday night, Pence was calm, cool, and collected. His from-the-heartland demeanor and values complemented Trump. He broadened Trump’s coalition. He followed the old Ohio State University football coach Woody Hayes’ axiom – “three yards, and a cloud of dust.” He wasn’t flashy, but he put points on the board for the Trump-Pence ticket.

And Sen. Harris? She came across as she did during her debate performances in the midst of the Democrats’ 2020 presidential primaries: She turned off many viewers. (There was, after all, a reason she was one of the first wannabes to drop out.) She came across as smug, arrogant, and more than a bit condescending, even as she refused to answer legitimate questions.

Early on, she dropped her guard when she failed to explain how Joe Biden’s plans for handling the COVID pandemic were different from those of the Trump-Pence administration. Pence rightly suggested Biden’s plans looked “a little bit like plagiarism, which is something Joe Biden knows a little bit about.”

Shortly thereafter – amazingly, without any pressure from Pence! – Harris declared, “On day one, Joe Biden will repeal that [Trump] tax bill.” Repealing the 2017 Tax Cut and Jobs Act would raise taxes across the board. Read her lips: Lots of new taxes. In promising to raise taxes as a campaign strategy, Harris joins Walter Mondale, who went on to lose a 49-state landslide after doing so.

Later, Harris set Pence up for a stinging attack against Biden and his former administration’s failure to rescue Kayla Mueller, who had been captured by ISIS. Mueller’s parents sat in the audience as guests of the vice president. And Pence used his time to show how national security decision-making can have very real and personal effects on the lives of regular American citizens.

When the subject matter turned to the Supreme Court, Pence asked Harris if she and Biden were going to “pack” the court with additional left-wing judges to enact through the courts a leftist policy agenda they cannot implement democratically through a legislature, if Trump nominee Amy Coney Barrett were to be confirmed. Harris evaded, instead talking about Abraham Lincoln. Pence pressed again, and Harris evaded again.

For Harris, the rest of the debate was no better. On taxes, foreign policy, healthcare, and relations with China, Harris flailed, evaded, or distracted…anything, that is, but answer fully and appropriately.

Harris’ evasions combined with Biden’s meandering responses from his debate a week earlier leave more questions than answers in the minds of American voters. In a pandemic with unprecedented lockdowns and curtailments on our individual liberties, the American people deserve better than the Biden-Harris non-answers.