Biden and Harris Must Learn That Words Matter, Especially When It Comes to Immigration 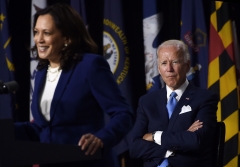 On the 75th day after President Joe Biden tasked her with “stemming the movement of so many folks, stemming the migration to our southern border,” Vice President Kamala Harris traveled to Central America to meet with Guatemalan President Alejandro Giammattei and Mexican President Andrés Manuel López Obrador. And how many trips to America’s southern border had she made in those 75 days, prior to her sojourn abroad? Precisely zero.

You might have thought that before she visited with American neighbors to the south, she might have wanted to see for herself the crisis she’s been tasked with resolving.

You might have thought that before she sought opinions from foreign leaders about why tens of thousands of their countrymen were embarking on the arduous journey north, she might have met with her own countrymen who live and work on the southern border to seek their opinions on the crisis and what needs to be done.

You would have been wrong.

Harris did not need to travel abroad to discuss “root causes” of the illegal immigration crisis on our southern border.

Harris did not need to fly to Guatemala City to learn why the border security agencies of the United States Government apprehended more than 170,000 people – a 20-year high – trying to cross our southern border illegally in the month of May.

Harris did not need to visit with Guatemalan President Giammattei on Monday to learn what he thought was incentivizing his countrymen to head north. All she had to do was watch his interview on CBS News last Friday evening, or even just read the article posted to CBS News, in which Giammattei, asked if the migration to the north had revved up following the inauguration of President Joe Biden, explained: “The message changed to, ‘We are going to reunite families and we are going to reunite children.'…The very next day the coyotes here were organizing groups of children to take them to the United States.”

That’s the message that was received south of the border when the Biden administration announced it was overturning the Trump administration’s Migrant Protection Protocols, which required asylum-seekers to remain on the south side of the border while their asylum claims were being adjudicated.

Of course, it wasn’t just the message the Biden-Harris administration sent after the inauguration that incentivized a mass exodus north from Latin America; as a candidate for president, Biden had promised to end all construction on the border wall, create a path to citizenship for every illegal immigrant currently residing in the United States, reverse the policy of family separation, suspend all deportations for 100 days, terminate “prolonged detention,” and “end workplace raids.”

And who could forget Biden’s campaign promise to provide free health care to illegal immigrants?

Not wanting to take responsibility for the crisis brought on by Biden’s and Harris’ own actions is perfectly understandable…if you’re Biden and Harris. So it wasn’t really a surprise when, less than a week before she departed for her trip, CNN reported a story headlined, “Vice President Harris’ Team Tries To Distance Her from Fraught Situation at the Border,” revealing that after President Biden’s announcement that she would take on the role of border czar, “Harris’ aides appeared to ‘panic,’ according to one of the officials, out of concern that her assignment was being mischaracterized and could be politically damaging if she were linked to the border, which at the time was facing a growing number of arrivals.”

The rest of the world sees that. Why can’t Biden and Harris?