From Believing Accusers to Felons Voting, Here Are My Harris Questions for Biden 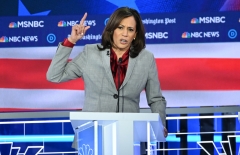 At last, Joe Biden has announced his pick for the VP slot – it’s California Sen. Kamala Harris – and that means it’s time for a list of questions for the former vice president.

Sen. Harris has said she believes the women who accused you of unwanted touching, saying, “I believe them and I respect them being able to tell their story and having the courage to do it.” Did you ask her during your conversations with her over the vice presidential nomination if she still believes those women, and, if so, what did she say?

In the first Democratic debate of the primary season, in the summer of 2019, Sen. Harris said to you that “it was hurtful to hear you talk about the reputations of two United States senators who built their reputations and career on the segregation of race in this country,” and said that “you also worked with them to oppose busing,” meaning, federal efforts to integrate public schools by transporting black school children into mostly white schools. You did not express regret during the debate for your “hurtful” comments. During the course of your conversations with her over the vice presidential nomination, did you apologize to her for speaking those “hurtful” words, and, if so, did she accept your apology?

Sen. Harris was one of the first Democratic senators to co-sponsor Sen. Bernie Sanders’ “Medicare for All” government takeover of healthcare, which has been costed out at $32 trillion, before partially retreating from the plan. Have you discussed this with her, and have you come to an understanding of what plan (or plans) she supports, how much it will cost, and how much healthcare freedom individual Americans will be required to sacrifice upon its enactment?

When Sen. Harris partially retracted her support for Sen. Sanders’ “Medicare for All” plan, she said she had misunderstood the question and said she thought she was being asked if she would personally give up her own private insurance plan to join Medicare. That stretches the bounds of credulity. Did you discuss this contradiction with her, and ask her to explain more fully, and, if so, how did she explain herself?

In April 2019, on CNN, Sen. Harris answered a question about voting rights for convicted felons who are still incarcerated (including the Boston Marathon bomber) by nodding her head and saying, “we should have that conversation.” Do you believe we should allow convicted felons who are still serving their sentences to have their voting rights restored?

Sen. Harris voted twice against even considering a bill that would have required an abortionist to provide medical care to a baby born alive after an attempted abortion. Do you share her belief in a completely unlimited “right” to abortion, even past the moment of birth?