Bad Lawyers and the Biden Admin 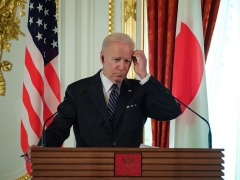 When it comes to the Biden Administration’s regular and ongoing failures to a) follow the laws on the books and b) enforce the laws on the books, I do not know which is worse. What I do know is that, increasingly, it has become clear that Biden is failing to carry out his constitutional duties.

The Constitution imposes two duties on a president. First, the language of Article II, Section 1 requires that the president swear (or affirm) an oath to “faithfully execute the Office of President of the United States,” including a promise to “preserve, protect and defend the Constitution of the United States.” Second, the language of Article II, Section 3 says, “he shall take Care that the Laws be faithfully executed.”

The Biden Administration is repeatedly failing to carry out both obligations.

On May 20, for example, federal district Judge Robert Summerhays of the U.S. District Court for the Western District of Louisiana issued a 47-page ruling halting the Biden Administration’s plans to rescind the use of a public health authority known as Title 42 to help control immigration flows on the southern border.

In the ruling, Judge Summerhays noted that when the Trump Administration first put the Title 42 order in place in March 2020, it followed the strictures of the Administrative Procedures Act (APA), which require that a federal agency engage in a public comment period seeking guidance on a proposed rule-making. After obtaining 218 comments during the 30-day public comment window called for by that law, the CDC released a final rule on Sept. 11, 2020.

Then Summerhays noted that when the CDC issued its Termination Order ending the use of Title 42 in early April 2022, the Termination Order itself “claimed that it was ‘not a rule subject to notice and comment under the Administrative Procedure Act.’” Judge Summerhays disagreed, and ruled that the CDC Termination Order was subject to the public notice and comment requirements of the APA. And because the Biden Administration CDC had not bothered to seek public comment, it had violated the APA, and the plaintiffs – 24 states, led by Arizona, Louisiana, and Missouri – were entitled to relief.

This is not the first time the Biden Administration has had its overreach rejected by a federal court because it failed to follow the law. Just in April, federal district Judge Kathryn Kimball Mizelle struck down Biden’s federal public transportation mask mandate because the CDC had exceeded its authority and failed to follow the requirements of the APA. Prior to that, the Supreme Court itself had struck down Biden’s vaccine mandate on large employers, on the grounds that the Labor Department’s Occupational Safety and Health Administration exceeded its authority. And in August 2021, the Supreme Court struck down the Biden Administration’s eviction moratorium, again, arguing that the CDC had exceeded its authority – “If a federally imposed eviction moratorium is to continue, Congress must specifically authorize it,” said the unsigned eight-page ruling.

That’s a remarkably bad track record. You’d think some lawyer somewhere inside the Biden Administration would scratch his head and wonder what’s up with that miserable record, and what could be done to fix it.

For instance,18 U.S.C. § 1507 makes it a federal crime punishable by a fine and/or up to a year in prison to picket or parade near a judge’s home with the intent of influencing the judge. Ever since a Supreme Court draft ruling was leaked and published weeks ago, that law against picketing or parading near a judge’s home has been violated on a regular basis by protesters unhappy about that prospective ruling.

President Biden is known for exaggerating his class rank in law school. Given his inability to adhere to the most basic fundamentals of the Constitution, perhaps Americans should wonder about his grade in 8th grade Civics class.