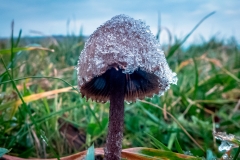 Right now, there is a concerted effort to change the American public’s attitude towards psychedelic drugs. Turn on Netflix, Hulu, or other streaming services, and you’re likely to find shows and documentaries on the usefulness of drugs like LSD (acid), DMT (spirit molecule), MDMA (ecstasy or mollies), and psilocybin (magic mushrooms). These shows are the first public signs that we are being primed to accept the recreational and “prescription” use of psychedelics to solve both our mental and spiritual ills.

Since the Nixon years, the U.S. Drug Enforcement Administration has marked psychedelics as schedule 1 substances because they lack clinical value, can be addictive, and hold the potential for long-term physiological and psychological damage, including schizophrenia-type symptoms.

Given this classification, how does one change public opinion about a class of drugs associated with images tucked firmly in the American consciousness of spun-out flower children whirling around the grass at Woodstock or loitering aimlessly on the streets of Haight-Ashbury?

According to Edward Bernays, the father of public relations and nephew to Sigmund Freud, in order to “manipulate the public to think a certain way, it needs to be taught how to ask for what it [the manipulator] wants.” Robert Worchester, a political analyst, described public opinion by making a distinction between attitudes, opinions, and values. He noted that a person’s values are the most impervious to change; however, through continued exposure, thought, and discussion, these too can be shaped.

When it comes to influencing our view about psychedelics, what could possibly compete with the images of dancing hippies? What about a growing body of scientific literature that claims the use of these drugs can help resistant anxiety, posttraumatic stress, depression, alcohol, and tobacco abuse?

For the past 30 years, research studies involving psychedelics were not backed by public funds — until recently. Studies have been popping up in clinicaltrials.gov. There have even been several reports, with small sample sizes, touted as “success stories” for reducing mental health symptoms by microdosing these drugs.

Mental health is certainly a concern for Americans. In early December, a Gallup poll found that Americans rated their mental health at an all-time low, with only 34 percent giving themselves an excellent score. Aside from this poll, we know that our society is facing significant mental health challenges, with nearly 20 percent of the population suffering from anxiety disorders and suicide ranked as one of the top 10 causes of death in the United States.

The media is not the only group riding high on our mental health problems. Groups like Mind Medicine, a pharmaceutical start-up, are seeking FDA (national) approval for psychedelics, under the expectation that the drugs will provide an alternative treatment to the aforementioned mental health conditions. Veterans and first responders have already been enlisted in these studies.

The co-founder of Mind Medicine stated the company's goal is to “get the average person to realize that these are not evil drugs — they can be used as medicines and be successful at treating unmet medical needs.”

Aside from the attempt to lend credibility to these drugs through science, there has already been a push to legalize psilocybin (magic mushrooms). Some states and cities have already moved to legalize these substances for recreational use. These places include Denver, Colo., Oakland and Santa Cruz, Calif., Ann Arbor and Washtenaw County, Mich., Somerville, Cambridge, and Northampton, Mass., Washington, D.C., and Oregon. Seattle is the largest city to decriminalize all psychedelic plants and fungi for religious, spiritual, healing, or personal growth practices.

California is currently proposing its own measures to legalize psilocybin mushrooms, truffles, sclerotia, and mycelium. Iowa is following suit, but with an additional bill that would reclassify psilocybin, ibogaine, and MDMA for medicinal purposes.

The real goal here is to nationalize the use of these drugs, which have the potential to significantly alter our society and offer bad treatment for those suffering from trauma, anxiety, and depression. The strategy we are seeing to promote psychedelics has been taken right out of the playbook of Big Marijuana. Rather than fight the arduous battle of changing the schedule 1 designation at the federal level, there’s a major push to make these drugs respectable. Research studies and popular media will continue to promote medical benefits associated with these drugs, but the endgame is for psychedelics to be legalized at every local and state level for recreational use.

Fighting major pharmaceutical and research industries may seem like an uphill battle. However, there are important steps that we can take to slow this fast-moving train:

Jennifer Bauwens is the director of the Family Research Council's Center for Family Studies. She has focused on psychological trauma and has worked as a clinician giving trauma-focused care to foster-care children and adults who have suffered from assault and sexual abuse.