No Need for More Biden Pressers 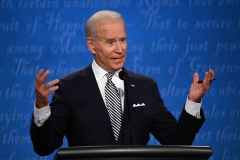 Americans waited a long time for President Biden to finally take questions in a press conference. Now that the first one is in the books, it could be a very long time until there is another one. Given how inconsequential the first press conference was, that is probably just as well.

The Biden presser opened with the President engaging in self-congratulatory pronouncements about COVID vaccinations, opening schools, and an optimistic 6% GDP growth forecast for this year. Reporters let all that bluster slide unchallenged, apparently unwilling to deviate from their pre-planned questions to actually challenge the President’s public relations proclamations. COVID and the economy, topics at the forefront of citizens’ minds, were left out of the media’s questioning.

The press provided cover for Biden during his stealthy campaign for the White House. The media establishment silently let a guy win the presidency from his basement, failing to challenge the candidate even on those few opportunities when reporters had access. Anybody who might have figured the press would finally probe the Biden mystique once he was in the Oval Office knows better after just one press conference.

The assembled reporters seemed to be walking on eggshells during the presser, none wanting to be the journalist who would create a history-making moment and ask Biden the question that would spark a major gaffe. That was quite a contrast to Trump press conferences, when combative reporters wanted to raise their profiles by claiming the most antagonistic highlight of the day.

The reporters treated Biden as though he were a grandpa celebrating his birthday, careful not to confuse or upset him. Instead of enterprising, in-depth questions, reporters treated Biden to gushy praise, including a sycophantic utterance about being a “moral, decent man.” Other questions teed up the president to self-righteously take off on the Senate filibuster, voting rights, and his own re-election campaign.

While Biden did seem to sidestep the major gaffe, he crept to the edge of disaster on multiple occasions with a series of mini-gaffes and incoherent, rambling responses. He responded to a question about recent mass shootings by talking at length about infrastructure and roads. He stopped himself in the middle of one answer, saying, “I’m going to say something outrageous.” He promised transparency on the conditions at the southern border, but only after the administration has installed its plans. He left Americans scratching their heads trying to figure out what or who the heck “Jim Eagle” is.

Only ten reporters were lucky enough to ask a question, selected in advance by Biden’s handlers, presumably on the basis that those scribes were deemed to be totally unthreatening. None of the lucky ten had enough gumption to challenge Biden’s wild claims that the chaos at the border is merely seasonal, or that most border crossers are being sent back. They also let Biden say with a straight face that, while Republican congressmen oppose Biden’s initiatives, Biden somehow has the support of Republican voters. One must wonder which polls are indicating that bizarre assertion.

The first Biden press conference left most Americans wondering, as the singer Peggy Lee once warbled, “Is that all there is?” This presser showed America in a weakened condition. It was impossible to miss the leader of the free world rambling and struggling to answer questions, often relegated to reciting prepared remarks directly off of cheat sheets. It showed a hapless press playing along in a staged theatrical show, failing to serve as surrogates of the public and challenging the government’s pre-fabricated spin.

There is no need for another such weird display for the duration of Biden’s term. The nation can just assume that no news will come from such spectacles, and that Biden is not up to the task of a serious give and take on the issues of the day. Instead, the nation and the press corps can just save time and have Biden’s newspeak machine post copies of the presser notecards on social media.