Jan. 6 Hearing Was a One-Sided Boxing Match With No Haymakers 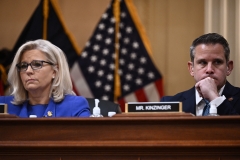 Twentieth century sociopolitical sage G.K. Chesterton once mused, it is "precisely because our political speeches are meant to be reported, they are not worth reporting.” The Jan. 6 committee would have been wise to consider that reflection. The hearing was designed more as a political event than a search for truth or policy deliberation. That was so obvious that the stunt lost any opportunity to affect the public sphere.

Roughly 20 million Americans tuned in to the televised primetime Jan. 6 committee presentation. That seems like a lot. But considering the committee was trying to convince the nation that American democracy is at risk, that number is rather modest. Given that almost all major television outlets were shamed into providing live coverage, this audience turnout is unimpressive. Either Americans are just too oblivious to recognize the threat to democracy, or they have moved on to other concerns, of which there are many in today’s America.

If the orchestrated hearing had been a boxing match, judges would have ruled it a draw. The committee landed some punches against the Capitol miscreants and former President Trump. But in the aftermath of the hearing, it appears no public groundswell is in the offing. People have had eighteen months to ponder that fateful day and most have already processed it as they see fit.

Of course, a boxing match features two opponents, but the Jan. 6 committee hearing was a singular broadside. That was a failure of this political theater. It was as though the committee were sparring with a heavy bag. No counterpuncher was on hand to respond, add context, or challenge the spin.

Americans are accustomed to seeing two sides presented in legal trials or political debates. They know that the truth is strengthened when challenged and put in context. The absence of rhetorical opposition in the Jan. 6 hearing made the process look like, well, an exercise in propaganda. Thus, this primetime televised extravaganza was tainted before the television cameras were turned on.

Fair-minded Americans, which includes most everybody, know the events of that day in January 2021 were awful for the nation. The hearing reiterated that sad point, but people already knew that. The Jan. 6 committee failed to deliver anything beyond the expected anti-Trump salvos and labeling of rioters as extremists.

The inconsequential outcome of this primetime hearing demonstrates the limitations of both political spin and television as a medium of influence. Even with a hotshot broadcast network executive to produce the event, the made-for-media spectacle was not slick enough to overcome the rhetorical challenges or the entrenched public sentiment.

Television is a medium of emotion and is largely ineffective as a platform for argumentation. Showing video segments of Trump family members was sensational, but hardly enlightening. The testimony of the Capitol Police officer was gripping, no doubt, but largely reiterated the chaos and danger already etched in the nation’s mind.

It is difficult to package all of the investigative data and depositions into two hours of television. There are more scheduled televised hearings to come, of course, but the main problem remains: how to make complex legal arguments in a video context. If the committee had a haymaker to land, it should have been in the original primetime setting. Getting the public to pay attention in the subsequent daytime hearings will be harder, as the boy who cried wolf well knows.

The timing of this primetime performance is also curious. A weeknight hearing during summer seems an unlikely time to generate maximum public attention, particularly when Americans have plenty of other immediate problems on their minds. The events of Jan. 6 were portrayed as a threat to democracy, but Americans currently sense a crumbling economy as a threat to their customary existence, not to mention a porous border, and America’s proxy involvement in a war with Russia that could destabilize a madman who has his finger on a nuke button.

Staged media events are certainly not the best way to deliberate on the nation’s challenges. If the Jan. 6 committee has to resort to putting on media extravaganzas to make its points, they are already rhetorically losing. As challenging as it might be, the committee should present its case within the normal procedures of legislative hearings, relying on more facts and less drama. If the case is solid and the public perceives its importance, that will become clear enough and the voters will take it from there.