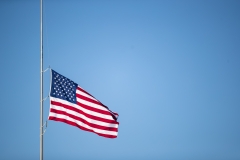 The nation’s establishment messengers, the media, will have to develop a new template for COVID coverage, now that citizens show signs they are moving beyond mandates, lockdowns, and fear. The constant refrain of panic and fright, which has characterized COVID reporting for two years, has lost its clout. Interesting that it took a grassroots movement of school parents and truckers to tell the world that living in constant angst is no way to exist.

Formulaic COVID journalism obsessed over no-context scoreboards of case and death numbers, issued dire warnings of constant COVID surges and variants, and rolled endless video of emergency rooms and people getting vaccination shots. The reporting relied on blind worship of science from certain experts, but demonized citizens and even physicians who had alternative viewpoints. Political opportunists used a fawning media to impose sanctions because of an “abundance of caution,” exploiting the masses for manipulative purposes.

The media and Big Tech sparked paranoia over “misinformation,” shouting down or actually shutting down smaller voices who questioned masking kids in schools, business lockdowns, or vaccination mandates. Those questioners were labeled conspiracy theorists or threats to domestic security. The loudest voices in the public square were big media, government and Big Pharma, but they freaked when a podcaster or parent tried to whisper something into the public discussion. Authoritarianism prospers when those with the biggest megaphones and levers make a point to shut up those with lesser platforms in the marketplace of ideas.

But now the rhetorical trap door is being sprung and the media will have to figure how to cover COVID in a world in which fear is losing its drive. Lockdowns are now less cool and mask mandates are starting to disappear, yet COVID is still around and may be here for a long haul. Journalists and politicians spent two years pounding citizens with the “follow the science” mantra. Now, even CNN’s medical expert is sheepishly acknowledging “the science has changed.”  So much for “the science” in the singular.

The brilliant sociopolitical observer of the mid-twentieth century, Eric Hoffer, once wrote, “It is clear that a society in the grip of fear is not free no matter how many freedoms its constitution guarantees.” Americans now fear COVID less than they fear the loss of freedoms. In retrospect, relying on the rhetoric of fear in COVID reporting diminished the nation’s ability to manage the pandemic in a measured way.

Recent research by Rasmussen Reports shows half of all Americans think news coverage of the pandemic has been exaggerated. Another study reported in Ballotpedia shows more Americans now fear government restrictions and lockdowns more than they worry about contracting COVID. Americans rightly wonder why shrill, hair-on-fire news coverage pushed a COVID fear narrative at the expense of assessing impacts on mental health, kids’ education, and economic stability.

But while the public was ditching the culture of fear, journalists refused to broaden coverage that broke from the narrative. Talking points about a “pandemic of the unvaccinated” persisted from health officials and their media stenographers even when data raised questions about that claim. Most establishment media outlets conspicuously ignored covering a study that cast doubts on the effectiveness of lockdowns. This journalism of omission shows the news industry doesn’t trust news consumers to make their own sense of things. Maybe a study from Johns Hopkins is nonsense, but citizens should be allowed to decide for themselves.

COVID no doubt challenged the news media in unique ways it couldn’t necessarily have anticipated. The suffering of COVID victims and families was quite real. Resorting to a template of fear and political manipulation, however, disrupted the nation’s ability to respond to the COVID challenge. The poorly measured reporting of COVD delayed implementation of common sense responses and sparked additional polarization in an already splintered society. This journalistic failure ultimately has done as much or more harm than the havoc of COVID itself.

The news industry must change its approach to covering COVID because it is just a matter of time until another variant or another pandemic shows up. Some modest steps have already been taken with regard to reporting case counts. More needs to be done, primarily in tone and certainly in terms of using a pandemic to drive ideological wedges.

Audiences are now rejecting the screechy bombast of bureaucrats and media conjurers in corporate towers. Evidence that the nation is emerging from fear can be found by looking at a packed Super Bowl stadium (complete with unmasked celebs) and in the sold out status of the upcoming Daytona 500.  More evidence comes from school kids jumping for joy when told of the end of mask mandates. The media led the nation into ravines of fear, but the citizens are now figuring out for themselves how they want to live. Media credibility has taken yet another hit.