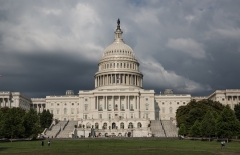 Congress should strip federal grants of directives telling the states how the money is to be used. (Photo by George Rose/Getty Images)

American independence was won and the Republic created by a remarkable generation of men who turned a rebellion against the British crown into a transforming moment in human history, one based on the revolutionary proposition that all men are created equal and are endowed by their Creator with fundamental rights that no government has the moral authority to set aside.

But with the gaining of independence, the Founders faced the formidable task of creating a government that could operate effectively while respecting and protecting the liberties for which the Revolution had been fought.

The architects of the American Republic had no illusions about human nature, which is the one constant in human affairs. From their study of the history of free societies reaching back to ancient Greece, they understood that the drive to accumulate power, whether by an individual despot or a parliamentary majority, is the historic enemy of individual freedom.

They therefore incorporated two safeguards into the Constitution: its system of separation of powers, with its checks on potential abuses, and the principle of federalism as underscored by the Tenth Amendment’s command that all powers not assigned to the federal government be reserved to the states.

On taking office, members of Congress must "solemnly swear" that they "will support and defend the Constitution of the United States against all enemies, foreign and domestic’ and "bear true faith and allegiance to the same." Yet over the past many decades, Congress has been systematically engaged in undermining both of that document’s most fundamental safeguards of our individual freedoms. Yet most Americans appear oblivious of that fact and of the seriousness of the consequences if left unchecked.

During our first 180-odd years, Washington largely observed those safeguards. But with the advent of Lyndon Johnson’s Great Society, Congress began a wholesale assumption of the states’ responsibilities. As I explain in my 2014 book Saving Congress from Itself, it has done so through a proliferation of federal programs that offer states and their subdivisions grants of money for purposes that are the states’ exclusive concern.

These grants come with the most detailed instructions on how the money is to be used. Out of deference for the Tenth Amendment, the Supreme Court has stipulated that Congress may not coerce the states into accepting them. Fifty years of experience, however, has demonstrated that states find it enormously difficult to decline what is viewed as free money from Washington however onerous the attached conditions. Thus the practical effect of the Court’s decisions has been to empower Congress to bribe the states into accepting Washington’s directions on matters that remain the states’ constitutional responsibility.

Members of Congress have become addicted to these programs because they deal with matters that are of the most immediate concern to their constituents, matters such as housing, schooling, job training, potholes, you name it. Therefore, their creation and the securing of grants offer members the easiest way to rub elbows with voters and generate the favorable headlines that will assure their reelection. As a consequence, whereas those programs distributed $24 billion in 1970 when I was elected to the Senate, by 2015 that figure had reached almost $641 billion or one-sixth of total federal spending that year, and all for purposes that are none of Washington’s business.

The result has been an avalanche of regulation-ridden programs that now provide federal subsidies for virtually every activity in which states are engaged. They have thus converted the states in too many ways into mere administrators of programs created in Washington and overseen by bureaucrats who are the furthest removed from where the money is to be spent.

In short, those programs have effectively nullified the Tenth Amendment. But that isn’t the only way that Congress has been undermining the Constitution’s safeguards. Over the years it has also been chipping away at its separation of powers. The Constitution provides that "All legislative Powers herein granted shall be vested in a Congress of the United States." Thus Congress is the sole legitimate source of federal laws. Responsible law writing, however, can be a difficult art, and the more complex the legislative details, the greater care is required to ensure that the finished product does neither more nor less than Congress intended.

As I say, this is demanding work. So Congress has fallen into the habit of delegating ever more essentially legislative details to executive agencies that in turn produce the detailed regulations that give congressionally enacted laws their effect. In doing so, the agencies tend to resolve statutory ambiguities in ways that will meet their own objectives, which may or may not coincide with those Congress had in mind.

Over time the effect of all of this has been the creation of an extra-constitutional administrative state that both writes and administers the rules that now govern ever wider areas of American life. Procedures are in place that are intended to subject regulations to scrutiny before they can take effect. But the administrative state can sidestep them by simply writing letters, as it did recently when it advised schools that boys must be allowed to use girls’ bathrooms if they think of themselves as girls. And the administrative state gets away with such excesses because they have become so common in current practice that Congress too rarely raises any objections.

So here we are today. Federalism is just a memory and Congress’s abdications of its own responsibilities have given us an expanding administrative state whose non-elected officials govern by regulatory fiat. As I noted in my book, an effective federalism is easily restored. All that is required is for Congress to strip the grants of federal directives telling the states how the money is to be used. This simple reform would once again allow accountable state and local officials rather than distant bureaucrats to determine how best to meet state and local needs. Unfortunately, Congress has thus far failed to follow my advice.

Restoring the Constitution’s allocation of governmental powers, however, will be a far more difficult task. Over the past generation and more our educators have abdicated their responsibility to ground their students in the fundamentals of the American experience. As a result, far too many of our people now suffer from a peculiar form of historical amnesia. They remember all our past sins, such as slavery and our treatment of the Indians. But far too few have a sufficient awareness of the constitutional and economic principles that, on the historical record, had made ours the most productive, prosperous, innovative, generous, and free society the world had known; principles that were responsible for the freedoms and material well-being they take so much for granted. I have had to use the past tense, however, because our nation is no longer the world’s freest.

As a consequence, we have become a nation of constitutional illiterates. Few Americans have any understanding of the degree to which the Constitution’s safeguards are being whittled away. So we need to remind them of their existence and hammer home the urgent need to bring the administrative state under effective constitutional control. That will be anything but easy, but it has to be done.

The challenge to preserve our Republic has always been with us. But it is now facing an unprecedented threat. As Benjamin Franklin reminded us at the close of the Constitutional Convention, while the Framers had given us a Republic, it would be up to us to "keep it." But to do so, it is essential that Americans grasp the significance of the threats to which they are being exposed by Congress’s abandonment of the Constitution’s most essential safeguards.

James L. Buckley has served in the federal government as a senator, an undersecretary of state, and an appellate judge. His most recent book is Saving Congress from Itself (Encounter Books 2014).