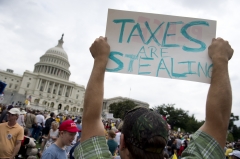 Demonstrators with the Tea Party protest the Internal Revenue Service (IRS) targeting of the Tea Party and similar groups during a rally called "Audit the IRS" outside the U.S. Capitol. (Photo credit: SAUL LOEB/AFP via Getty Images)

A commentary in the New York Times Monday demonstrates how different libertarians are from conservatives. The article, originally entitled “How Not to Reform the IRS,” is written by Pete Sepp, president of the National Taxpayers Union. Founded in 1977 by James Dale Davidson, the NTU is a longtime conservative organization devoted to tax reform.

In his article, Sepp states, “More resources for customer service, taxpayer rights safeguards, a functioning Oversight Board, actionable and regularly-updated research on the tax gap, and innovative approaches such as the recently proposed enforcement fellowship pilot program are all solutions that should unite Washington — just as concern over taxpayer rights has for over 30 years.”

Additional resources for IRS enforcement and proposals for income-tax reform might unite the politicians and bureaucrats in the nation’s capital, but they are a far cry from a genuinely free society, which is what unites us libertarians.

As the federal government moves toward ever-increasing spending, debt, and monetary debauchery through inflation, it is imperative that we libertarians continue hewing strictly to freedom principles. If we begin going down the road of reform, as some conservative-oriented libertarians advocate, then the chances of achieving a genuinely free society dissipate. We libertarians remain the only hope for getting our nation back on the right track — toward freedom, peace, prosperity, and harmony.

No matter how bad things are and still might get, nothing is inevitable. Circumstances can turn on a dime. But in order for people to move toward genuine freedom, they have to first read or hear the principles of genuine freedom and then ponder and reflect on them. If all they hear is the case for tax reform, regulatory reform, welfare reform, military reform, intelligence reform, or surveillance reform, then that’s likely to be what they are going to ponder and reflect on.

It’s difficult to imagine but Americans lived without income taxation for more than 100 years. Our American ancestors clearly understood that an income tax — or what they called a “direct” tax — is antithetical to a free society. In order to be genuinely free, people have to be free to keep 100 percent of their earnings.

The freedom to keep everything people earned was one of the driving engines of the tremendous economic growth that characterized 19th-century America, especially in the period from 1870 to 1910. When government could not take any portion of people’s income from them, poor people were going from rags to riches in one, two, or three generations.

That was not the only thing that was unusual about the way our ancestors believed and lived. They also opposed immigration controls, which they lived without for some 100 years. There was also no Social Security, Medicare, welfare, education grants, and foreign aid. No Pentagon, CIA, NSA, or FBI. No foreign wars, coups, state-sponsored assassinations, torture, secret mass surveillance, denial of due process, indefinite detention, Gitmo, and alliances with dictatorial regimes. No fiat (paper) money and no Federal Reserve. No minimum-wage laws. No public-schooling systems. Few economic regulations.

With regard to income taxation, everything changed in 1913, when Americans living at that time adopted the 16th Amendment and, soon thereafter, a national income tax and the IRS to enforce it. Proponents promised that only the rich would be taxed. How laughable that is today!

In the same year, 1913, the Federal Reserve was enacted into law. Once President Franklin D. Roosevelt converted America to a welfare state with the enactment of Social Security and once he nationalized gold in the 1930s, the floodgates were open to massive taxation, spending, debt, and inflation through both the federal income tax and the Federal Reserve.

Today, both welfare-state spending and warfare-state spending are hurtling America toward a massive economic, fiscal, and monetary crisis. This is a perfect time for national soul-searching, especially before the crisis hits, when rational thinking will inevitably be in short supply. The best way to engage in such introspection is by reflecting on founding principles.

Among the best founding principles of our nation was no income taxation and no IRS — i.e., the right of people to keep everything they earned. Rather than accept the status quo and merely attempt to find ways to more efficiently fund and reform the IRS, as conservatives advocate, we should instead move toward achieving a genuinely free society by abolishing the income tax and the IRS.

Jacob G. Hornberger is The Future of Freedom Foundation's president and founder. He has served as a trial attorney in Texas, a law and economics professor at the University of Dallas, and the Foundation for Economic Education's director of programs.

Editor's Note: This piece originally appeared on the Future of Freedom Foundation.