I’m One of the Female Reporters Still in Afghanistan. The Country I Loved No Longer Exists 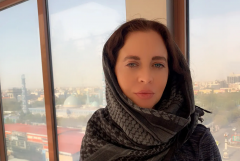 Journalist Hollie McKay was in the Afghan city of Mazar-e-Sharif during its Taliban takeover. (Photo credit: Jake Simkin)

The ancient streets of Mazar-e-Sharif, a once-vibrant northern Afghan city bursting with color and vitality, had dissipated into a ghost town in a matter of hours on late Saturday afternoon.

“The Taliban breached the first of the three front lines,” my interpreter Hami said to me energetically. “They are coming to Mazar. We are surrounded.” Oddly, he was beaming, as if to protect my nerves.

Still, I could not believe what I was hearing. Families with weathered faces and cowering bodies lumbered along the dusty streets and stuffed themselves into the backs of tiny trucks, fleeing the edges of the city to take shelter in the heart of Mazar. Shops shuttered, and equipment languished in abandonment beneath the scorching sun.

I texted several Afghan government officials and military personnel I had been in contact with throughout the rapid crumbling of the country. Every single one promised me that the city itself would hold for at least a few more days, if not weeks, if not forever.

Perhaps we all wanted to believe that Mazar – a longtime bulwark of Taliban resistance and the first place liberated from their rule in late 2001 – would ever fall into the hands of insurgents.

As the next few hours stretched on, and the heat gave way to a rare breeze, and the sun started to sink slowly, I could not shake the sense of unease prickling my entire body.

My photographer, Jake Simkin, and I wandered through the dark and barren streets to our favorite little kebab café, tucked down a dozen crooked steps beneath a spice store that had abruptly closed.

It was not the noise that put me on edge; it was the lack of it. There were no aircraft roaring through the skies, no heavy weaponry and bang-bangs, despite rumors that the Taliban were at the gates. So was anyone out there propelling the fighters back?

My heart was pounding. A sensation of nausea flooded over me.

We hurried along the cracked pavements toward our guest house, pavements that most nights bustled with cars and vendors. As I turned for one last view of the streets, a few motorcycles ripped through. They looked different, felt different, as though they were far from home.

Gunshots crackled through the starless night.

“Unfortunately,” my Afghan friend told me over the phone as I moved away from the glass windows as a precaution, “Mazar has just fallen.”

Two minutes later, my phone flashed with an email that my flight back to Kabul was canceled.

The disbelief morphed into knots in the pit of my stomach as the reality sank in. As a writer who operates in war zones, I had long harbored a curiosity of what it must feel like to be inside a city as it fell — but never in my wildest imagination could I have envisioned I would be thrust into the middle of it at such a frenetic speed.

Sporadic thuds of celebratory gunfire and the thunder of more and more motorcycles gained momentum throughout the night as we hunkered down in our rooms, peeping out at the scenes below with astonishment.

I texted with another Afghan friend near Kabul, Sama, throughout the strange night. She was nineteen and in love, studying pharmacy at university with dreams of becoming a doctor. Sama knew nothing of life before Americans came in and deposed the Taliban.

“I don’t know what this means,” she wrote over and over again.

As the first rays of sunlight broke through the next morning, it was clear that the country I had grown to love no longer existed.

The sun climbed high and the Call to Prayer reverberated through speakers the following morning, while the city plunged deeper into a new era that was not so new after all. There was very little traffic, just a spattering of motorbikes and men walking like ghosts in traditional clothes down the cracked pavements. Music and cars honking and loud phone conversations belonged to the past. Instead, the Taliban members, which were easy to identify based on their more raucous behavior and cradling of guns, appeared on street corners and always seemed to move on a mission.

Over the past few days of Taliban control, the landscape has slowly started to “normalize.” Some shops are re-opening, and market vendors are back in business, epitomizing those who have no choice but to feed their families and try to get by. Those that remain closed typically belong to those who have fled.

With each passing hour, a few more women are surfacing – sheathed behind the blue burka – and always accompanied by a male companion. More Taliban members are streaming in, and there is a growing acceptance of this painful new existence.

And as Kabul, some 300 miles away, adjusted to its dip back to centuries ago, I called Sama early Tuesday to see how she is doing.

“They are taking everything from me,” she said softly, refusing to refer to the new Taliban governance by name. “But they can’t take away my memories.”

Hollie McKay is a war crimes investigator and foreign policy expert. She worked for Fox News Digital as a journalist covering terrorism, warfare, and crimes against humanity for more than 14 years and has interviewed survivors of sex slavery, torture, and forced child jihadist training. Hollie is the author of "Only Cry for the Living," published by Di Angelo Publications.

Editor's Note: This piece originally appeared on The Independent.