Stagflation Returns as the Economy Shrinks 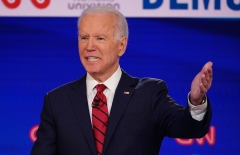 The U.S. economy shrank at a rate of 1.4% in the first quarter of 2022, reflecting a huge rise in America's trade deficit. The trade deficit ballooned massively, due to mushrooming imports. American exports decreased by 9.6%, while imports grew by 17.7%. Economists had predicted a 1% economic growth rate, rather than the decline in the economy that actually occurred.

Meanwhile, inflation continues to rise. The Consumer Price Index (CPI), the chief measure of inflation, soared 8.5% over the past year, the biggest increase since 1981. Producer prices have also skyrocketed, at the highest rate ever over the last year. Wholesale price inflation has reached double digits. Inflation is twice as high in America as it is in much of Europe. While America's economy was shrinking, France's economy was growing, and France's inflation rate is lower than America's.

"The Biden stagflation" is how finance professor Michael Busler describes our economy. "Stagflation is when there is high inflation, high unemployment, and slow or negative real economic growth," says Forbes. The longest prior period of stagflation was 1978-1982, which overlapped with two recessions.

To deal with the high inflation of the Biden era, Senator Majority Leader Charles Schumer (D-NY) suggested a tax increase. But raising taxes on Americans would likely reduce economic growth and could exacerbate the coming recession. Many economists are predicting a recession by 2023.

The economy may resume growing in the next quarter, but growth may be limited by overseas events. Russia’s war in Ukraine may result in raw-materials shortages and additional supply-chain problems. Trade may also be affected by the Chinese government’s pandemic-related lockdowns of some of its busiest ports, such as Shanghai, China's biggest city.

Inflation may get worse if Biden continues his policies that increase consumer demand without increasing the production of goods and services, driving up prices for those goods and services. Biden is weighing canceling student debt at taxpayer expense, even though his suspension of student loan repayments has increased the inflation rate and fueled tuition increases, in addition to costing taxpayers over $50 billion per year. Biden's suspension of repayments is illegal, according to some legal scholars. Canceling student debt could cost taxpayers over a trillion dollars, and would encourage colleges to massively raise tuition, by making it seem more attractive to take out loans to cover tuition. Each additional dollar in federal financial aid causes a tuition hike of about 65 cents, according to the Federal Reserve Bank of New York.

The inflationary effect of Biden’s policies has been described by many economists, even liberals like Bill Clinton's Treasury Secretary, Larry Summers, and Steven Rattner, who was in Obama’s Treasury Department. As Rattner noted in the New York Times, Biden has spent "an unprecedented amount" of taxpayer money, which has resulted in "too much money chasing too few goods." Biden's focus on "demand-side stimulus rather than on investment" helped cause "today’s inflation levels," Rattner wrote.

The economy is being held back by Biden Administration policies that discourage work, reward idleness, and make it harder for companies to attract employees. Biden enacted policies that reduced the size of America’s private-sector workforce and made America less economically competitive. Economists had expected that the U.S. economy would add over a million jobs in April 2021, because it had been growing rapidly since fall 2020 after bouncing back from the recession caused by the coronavirus. But instead, after Congress passed Biden’s $1.9 trillion “American Rescue Plan” in early March, employment grew by far less than expected in April, resulting in a shortfall of 700,000 jobs, due to work-disincentives contained in Biden’s plan.

Biden’s so-called “rescue plan” was financed with borrowed money. That increased our country’s huge national debt, which was already bigger than our economy — as big as in some nations that could not pay their debts during the European debt crisis.