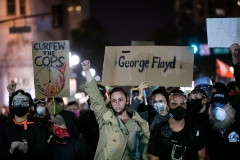 Demonstrators attend a "Sit Out the Curfew" protest against the death of George Floyd who died on May 25 in Minneapolis whilst in police custody, along a street in Oakland, Calif. on June 3, 2020. (Photo credit: PHILIP PACHECO/AFP via Getty Images)

Oakland has had 14 homicides since the start of the year — that compares with a single homicide during the same time period last year.

The numbers are shocking, but they pale when compared with the number of people wounded....50 gunshot cases have been treated there so far this this [sic] year — at least one shooting a day...The city’s ShotSpotter system recorded more than 200 rounds being fired in 39 incidents between 4 p.m. Saturday and 2 a.m. Sunday. Given the recent cutbacks in police overtime and the dismantling of the traffic and sideshow squads to save money, Oakland had a reduced staffing of 42 officers and supervisors on patrol for the entire city Saturday night.

“All this is set against a backdrop of over $20 million in cuts from the Police Department this year, including all the overtime that went to enforcement operations like sideshow and violent crime operations,” interim Oakland Police Chief Susan Manheimer said.

New York and Los Angeles are slashing funding for the police, as is Minneapolis, where murder rates rose by over 82% in 2020.

"In Chicago, gas stations are hiring private security guards to man the pumps for an hour or two each day because otherwise residents are too scared to fill up due to threat of carjackings," notes Hillsdale College radio host Scot Bertram, linking to coverage of this in the Chicago Tribune. Between Jan. 1 and Jan. 21, there were "144 vehicular hijackings in Chicago."

Carjackings are becoming more frequent because many carjackers don't have to worry about going to prison. As Jazz Shaw notes,

Thanks to a 2016 criminal justice reform law, it’s nearly impossible to transfer a suspect age 16 or younger into adult court. That means that they get off with very little time in juvenile detention if any. The police know this but are frustrated as to what to do about it. Adult gang members are able to convince the younger ones that they will be out in no time if they get caught. So the kids are given a gun and sent out to “work” so they can work their way up in the ranks. One suspect from last week who stole a Porsche Cayenne at gunpoint was 13 years old.

Defunding the police results in more violent crime and killings. America already spends a smaller share of its economy on the police than the European Union does. Europe has a lower murder rate. A larger police force catches more criminals, which deters crime from being committed in the first place, by increasing the likelihood of punishment for a crime.

In 2020, murder rose not just in cities, but in America as a whole -- although killings increased far less in rural areas than in cities. Data consultant Jeff Asher describes 2020 as "the largest one-year rise in murder that we've ever seen," larger than the 13% annual increase that was previously the record.

Rising crime also may have been fueled by releases of violent criminals due to COVID-19 and criminal justice "reform." As the Vera Institute of Justice notes, "The number of people incarcerated in state and federal prisons and local jails in the United States dropped from around 2.1 million in 2019 to 1.8 million by mid-2020 — a 14 percent decrease."

When criminals serve less time, crime rates rise. Conversely, lengthening prison sentences cuts the crime rate. Serious crimes in California fell due to Proposition 8. It increased sentences for repeat offenders who commit willful homicide, rape, and robbery with a gun. Those crimes fell significantly in California as a result.