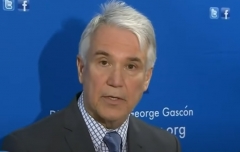 As NPR reports, "he calls for the banning of sentencing enhancements, a step which could lead to the release of thousands of inmates. Seeking longer prison terms for criminal defendants with past felony convictions...had become a common practice among LA prosecutors." "Gascón estimated such a move could affect at least 20,000 cases," according to ABC News.

Gascón is banning prosecutors in Los Angeles County from seeking the sentencing enhancements approved by California voters in Proposition 8. That ballot initiative increased penalties for repeat offenders who commit willful homicide, forcible rape, robbery, and aggravated assault with a firearm.

Gascón also will not allow prosecutors in his office to seek the death penalty. Gascón additionally vowed to stop charging juveniles as adults, meaning that 17-year-old serial killers will not be held beyond age 25.

Nor will Los Angeles prosecutors be allowed to seek bail before a criminal defendant is released, if the defendant is not charged with a violent felony.  "According to a special directive effective Tuesday, prosecutors will now be instructed to ask the court for the criminal defendant's release" instead. Gascón's office will also seek the resentencing of many inmates serving enhanced sentences.

It is very disturbing that Gascón is banning the longer sentences for repeat offenders provided for in California law. It is only fair to punish repeat offenders more than a first-time offender.

More importantly, such sentence enhancements prevent violent crimes and theft. Crime in California fell significantly after California voters adopted Proposition 8, which mandated longer sentences for repeat offenders who kill, rape, and rob others. A National Bureau of Economic Research study found those longer sentences deterred many crimes from being committed. As it observed, three years after Proposition 8 was adopted, crimes punished with enhanced sentences had "fallen roughly 20-40 percent compared to" crimes not covered by enhanced sentences. Sentencing enhancements prevented crime through deterrence, not just incapacitation, according to that study. Longer sentences both deter crimes from being committed in the first place, and incapacitate offenders from committing even more crimes, by locking them up.

In his directive banning sentencing enhancements, Gascón claims that longer sentences are not necessary, because they increase recidivism when the inmate is ultimately released, which offsets the benefit of incapacitation during the inmate's imprisonment. But even if that counterintuitive claim were actually true, Gascon's reasoning is flawed, because it ignores the fact that longer sentences prevent crime in multiple ways, not just through incapacitation of offenders (by locking them up). Longer sentences also deter would-be offenders from committing crimes in the first place, eliminating the need to lock many of them up.

As researchers Daniel Kessler & Steven D. Levitt found, longer sentences have "a large deterrent effect," suggesting that "sentence enhancements" are a "cost-effective" way to reduce crime. They described this in their NBER study, "Using Sentence Enhancements to Distinguish between Deterrence and Incapacitation." As they noted in that study, "California's Proposition 8...imposed sentence enhancements for a selected group of crimes. In the year following its passage, crimes covered by Proposition 8 fell by more than 10 percent relative to similar crimes not affected by the law, suggesting a large deterrent effect. Three years after the law comes into effect, eligible crimes have fallen roughly 20-40 percent compared to non-eligible crimes." (See NBER Working Paper #6484).

Gascón's argument about recidivism is hard to take seriously, because his directive also orders prosecutors not to enforce the ultimate tool against recidivism and repeat offenders, California's three-strikes law. The three-strikes law requires that certain repeat offenders who commit multiple serious crimes be sentenced to terms of "25 years to life." That way, they can't get out and commit serious crimes again, making recidivism impossible.

Gascón's directives will release many dangerous, hardened criminals, enabling them to prey upon innocent people.