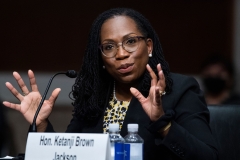 Ketanji Brown Jackson, nominated to be a U.S. circuit judge for the District of Columbia Circuit, testifies before a Senate Judiciary Committee hearing on pending judicial nominations on April 28, 2021. (Photo credit: TOM WILLIAMS/POOL/AFP via Getty Images)

President Biden has nominated Judge Ketanji Brown Jackson to the Supreme Court, following through on his campaign vow to name a black woman. Three-quarters of Americans disagreed with Biden's decision to consider only black women for the Supreme Court vacancy; in an ABC news poll, they wanted Joe Biden to consider "all possible nominees," regardless of their race or gender.

Progressives support this race-based appointment based on the assumption that blacks are underrepresented on the Supreme Court. But Jackson's confirmation would make the Supreme Court 22% black, even though America is only 12%-13% black, and the legal profession is less than 5% black. One of the nine Supreme Court justices is already black (Clarence Thomas); Jackson will be the second. Two out of nine justices is 22%, well above the percentage of Americans who are black.

Progressive minister and former Virginia Delegate Joshua Cole argued that Jackson's nomination is necessary, but not sufficient, to fix black women's underrepresentation on the Supreme Court. On Feb. 25, he wrote that "black women make up 13%" of America's "329.5 million Americans. Her nomination" and "subsequent appointment would only give black women 11% representation on SCOTUS.... she’s well past due!" In reality, black women make up only 6% or 7% of America's population, not 13%, as Cole claimed.

Biden's vow to appoint a black woman is defended by other progressives based on the unfounded assumption that blacks are underrepresented. The National Asian Pacific American Bar Association wrote, "President Biden’s promise to appoint the first black woman to the Supreme Court underscores his commitment to diversifying our judiciary....persons of color...continue to be underrepresented on our courts."

But even if Jackson were not appointed, blacks would still comprise 11% of the Supreme Court, which is similar to their percentage of the population (around 12%). As a Supreme Court Justice, Jackson would not be an "underrepresented member of a marginalized group" (as The Signal's Soorin Kim claimed) or the voice of a "marginalized and underrepresented" group (as NAACP board member Theresa Dear claimed). Her group would have nearly a quarter of all seats on the Supreme Court.

The percentage of black judges is likely to rise, because many recent judicial nominees are African-American; in June 2021, the Washington Post reported that “President Biden" had "nominated 11 minority women, 4 minority men and 4 white women" to the federal bench. He had "not yet nominated any white men" at the time, although he has since nominated some.

Progressive support for setting aside more seats on the Supreme Court for blacks may be fueled by widespread public ignorance of what the black percentage of the population is. The average American thinks America is 41% black, more than three times the actual percentage. As the pollster YouGov notes, “black Americans estimate that, on average, black people make up 52% of the U.S. adult population; non-black Americans estimate the proportion is roughly 39%, closer to the real figure of 12%.”

If you wrongly think America is 52% black, then you may understandably wonder why the Supreme Court is only 11% black. It may look like exclusion of black people to you, when in fact, it just reflects the reality that America is only 12-13% black, and our country has a legal profession that is only 4.8% black.

Liberal journalists constantly imply that blacks are "underrepresented" in powerful positions, no matter how many blacks hold such positions. That misleads the public into wrongly thinking a big share of the population must be black, when only one-eighth of all Americans are black.

Biden's nomination of judges like Jackson based on their race violates the Constitution. Setting aside positions for a particular race violates Constitutional equal-protection guarantees, unless that race has been subjected to recent, intentional discrimination in access to those positions. Courts have emphasized that in striking down racial set-asides, in court rulings such as People Who Care v. Rockford Board of Education (1997) and Podberesky v. Kirwan (1994).

Blacks have not been discriminated against in appointments to the Supreme Court in recent years. Indeed, there has been a black Supreme Court justice ever since 1967, even though blacks have never been more than 13% of the U.S. population during that period, and blacks have usually comprised less than 3% of the legal profession during that period. (It is the black percentage of the legal profession, not the black percentage of the general population, that is legally relevant in assessing whether blacks are "underrepresented" in the judiciary, according to Supreme Court rulings like Wards Cove Packing Co. v. Atonio (1989)).