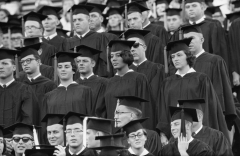 A total of 17 high schools in Virginia have been withholding National Merit Scholarship (NMS) award information from students and parents on the basis of equity, according to a New York Post op-ed by Virginia Governor Glenn Youngkin.

This battle between equity and merit is affecting the college futures of thousands of high-performing high school students in Virginia.

The scandal came to light in December last year after parents uncovered that administrators at Thomas Jefferson High School for Science and Technology (TJ) in Fairfax County had withheld their children’s Preliminary Scholastic Aptitude Test (PSAT) scores, according to an article written by a TJ parent published in City Journal.

Even for those who do not progress to the final stage of the NMS award process, the initial honor is used by colleges and universities to determine merit-based financial aid, according to Spark Admissions.

Administrators at the school received the students’ PSAT scores and NMS documents on September 16 but failed to inform students until November 14, several weeks after university early action and early decision deadlines passed in mid-to-late October.

When asked to provide comment, the Prince William County Schools (PWCS) Superintendent, Dr. LaTanya D. McDade, stated that failing to deliver the awards in her district was an "oversight based on sheer human error."

On December 4, Virginia Attorney General Jason Miyares launched an investigation into Fairfax County’s practices on the grounds of racial discrimination.

Fox News interviewed a parent in Fairfax County who reported that 75% of the students who received the Commendation in Fairfax, Loudon, and Prince William Counties are Asian.

Combined, these three counties serve over 350,000 students, according to their respective US News and World Report profiles.

“I’ve made it my life’s work to ensure equitable opportunities and equal outcomes for each and every student that I’ve had the opportunity to serve,” said Fairfax Superintendent Michelle Reid in her welcome message from April 2022.

Loudon County announced on January 13 that they will be updating their award administration procedures “[a]s part of continuous process improvements across the division, and in recognition of the importance of these awards” and is doing so “well in advance of next year’s cycle,” which was confirmed in their response for comment.

PWCS also told Campus Reform that they "will ensure every school has identified a dedicated person responsible for facilitating timely notification of student recognition."

In response to the ongoing scandal, Youngkin proposed a change to Virginia state law, requiring that notifications of national-level awards “be sent to students and their parents as soon as possible after the school system receives the information.” When contacted for comment, Youngkin’s office clarified that the language of the legislation specifically bans the withholding of award or academic achievement information.

“[T]he relentless focus on equal outcomes for all students at any cost is hurting, not helping, Virginia’s children,” Youngkin argues. “Strengthened opportunity in collective education can — and must — come without placing a cap on individual achievement.”