The Deafening Silence of the Russian Orthodox Church 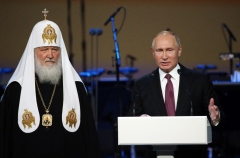 To the Russian Orthodox Patriarchate of Moscow:

The entire world is witnessing Vladimir Putin’s barbaric, unjustified war of aggression upon an innocent, free, democratic country in Europe. The immense courage and faith of the Ukrainian people have united the West and the world in unequivocal condemnation of the Russian president’s actions, unconditional sanctions against his regime, and unwavering support for Ukraine. Yet the deafening silence of the Russian Orthodox Church continues.

I was ordained as a priest in Russia, and for years before Putin’s autocratic regime I assisted the reconstruction of the cultural and spiritual patrimony the Soviet Union had destroyed. I have great affection for the Russian people and have friends among them, so I lament the tragedy that, again and again, this great nation’s leaders continue to use their vast resources to scourge the innocent. As president of aid to the Church in Russia, I assisted not only the Catholic Church but also the Russian Orthodox Church. I have frequently met and worked with members of the Russian Orthodox hierarchy, most notably Hilarion Alfeyev, Metropolitan of Volokolamsk and Chairman of the Department of External Relations of your Holy Synod.

Why is the Russian Orthodox Patriarchate not condemning this unjust war? Why do you not call on the Russian soldiers to lay down their weapons and abandon the field of battle? Putin’s forces not only flagrantly breach international law, but this is an anti-Christian war violating the Gospel you and I stand for. I have in person expressed my outrage and dismay that the Orthodox hierarchy has been in an unseemly long-term alliance with the Putin regime, despite its criminality inside and outside of Russia. We know of the immense benefices the Russian Orthodox Church has received from Putin and his oligarch friends for years. I have warned some of your high prelates that the Church’s dependence on the Putin regime would bring the loss of moral freedom to stand up against his criminality, let alone his manipulation of the Church.

Because of that, the voice of the Russian Orthodox Church is silenced again. One reason why Putin maintains such a strong hold on Russia is the constant blessing and veneer of Christianity showered upon so many of his public acts. The presence of Patriarch Kirill and other prelates at these functions continues to enable a ruthless autocrat to maintain control. Where is the Church’s support of Alexei Navalny and the hundreds of imprisoned Russians who seek freedom and peace? Where is its defense of those arrested in Moscow and St. Petersburg for peacefully protesting this insane Putin war? Why is the Russian Orthodox hierarchy not teaching that this war is without cause and, by all measures of morality and faith, unjust?

You are also far too close to many of the corrupt oligarchs who support Putin’s malevolent acts, by which much pain, suffering, and death will come to not only the great people of Ukraine but also hundreds of Russians soldiers. Young men who are part of your flock have already lost their lives in a fratricidal war engineered by Putin’s delusions and mad aspirations. Will your young Russians be sent to the front to kill and be killed without a word of condemnation by your hierarchy? Furthermore, many Russians have families and friends in Ukraine, and citizens around the world.

But the silence of Patriarch Kirill and the Orthodox Church is unworthy of your position and the faith we profess. The actions and support of the Russian Orthodox Church for the Putin regime give ample rationale for the split of the Ukrainian Orthodox Church from your jurisdiction. But how will you erase the stain that will now be laid at the feet of the Russian Patriarchate for their lethal silence? If this does not awaken all of you prelates in Russia from your stupor, it is unlikely anything will. You have been called to guide the faithful in Russia, and it should be evident that, to regain your moral freedom, you must now stand up and condemn unequivocally and publicly this unjust war. For Christ clearly taught, “What profit is there for one to gain the whole world yet lose or forfeit his soul?” (Luke 9:25)

In the initial account of fratricide, we read that, after Cain had murdered his brother Abel, God asked for an account. This account at the genesis of humanity should ring loud for the Russian hierarchy, their faithful, and indeed the Russian soldiers who should lay down their arms, refuse to obey unjust orders, and return to Russia. The Lord said to Cain, “Where is your brother Abel?” Then came the unholy reply of those who pretend to wash their hands of responsibility: “I do not know. Am I my brother’s keeper?” Indeed you are, and may the whole world remember that, at the hour of need of your brothers and sisters in Ukraine, the Russian hierarchy rested in complicit deadly silence.

So I call upon you, the Patriarchate of Moscow and the Russian Orthodox Church to join together in breaking your silence at this grave hour and unilaterally condemn the horrid, illegal actions of Vladimir Putin, for the good of your innocent neighbor, Ukraine, and for the good of your country.

Fr. Marcel Guarnizo, is a philosopher and theologian involved in public discourse on economics, philosophy, ethics and theology.