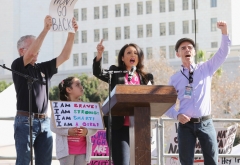 The council voted 13-0 to approve a motion that will require residents to prove vaccination status before entering retail shops, restaurants, bars, gyms and even grocery stores.

“Your decision to not get vaccinated doesn't just affect you,” LA City Council president Nury Martinez tweeted following the vote. “LA schools are starting next week. Children under 12 aren’t eligible for the #COVID19 vaccine and are at a greater risk when exposed to unvaccinated adults. Get the vaccine today.”

Los Angeles is the second city in the nation to enact this draconian measure, following New York City, which will require New Yorkers and visitors to the Big Apple to show proof of at least one dose for indoor dining and other activities starting Sept. 13.

In LA, city employees were one of the first populations targeted in the vaccine push.

“I am issuing an Executive Order to require all County employees, regardless of the Department they serve, to be fully vaccinated no later than October 1, 2021,” LA County Supervisor Hilda L. Solis' Aug. 4 statement read. “With today’s Executive Order, the County is prepared to lead, and I am hopeful other employers across our great County do the same.”

These recent actions may trigger other counties in California to follow in Los Angeles’ footsteps, enacting similarly strict mandates.

Not only is the city preventing unvaccinated Angelenos from socializing and running errands, but the University of California, Los Angeles health system, UCLA Health, has gone so far as to prevent citizens from visiting patients at hospitals and emergency rooms within the public health system.

“In alignment with the most recent health order from the California Department of Public Health (CDPH), COVID-19 vaccination verification is now required for visitors to UCLA Health and other general acute health care facilities in the state, starting on Wednesday, August 11,” UCLA Health posted on its site and wrote in an email to patients Tuesday night. “Starting Wednesday, August 11 at 11 am, UCLA Health will be conducting vaccine verification for visitors who are visiting patients in our hospitals.”

Vaccine status should not determine whether or not someone can see a sick loved one.

After nearly a year-and-a-half of lockdowns, citizens are fed up.

Requiring a vaccine for admission to go out, live life, and even purchase basic necessities like food and water is inhuman, let alone American.

Cities like Los Angeles and New York are setting an atrocious standard capitalizing on a global health crisis and dehumanizing citizens.

Vaccine mandates have already backfired in New York City where restaurant owners and businesses are beginning to resist.

“I just don’t think that we’re going to be the vaccination police,” restaurant manager Mary Josephine Generoso said. “That’s up to the mayor’s office. It’s up to the health department to figure out, but it certainly shouldn’t be the burden of store owners, bars, and gyms to be regulating that.”

Business owners do not want to be held liable for discriminating against customers based on vaccination status. Nor do they want to be responsible for mandating vaccines for their patrons. It’s not their job.

“In Florida, your personal choice regarding vaccinations will be protected and no business or government entity will be able to deny you services based on your decision,” DeSantis said.

If America is looking toward a future resembling normal life, the coastal elite’s vaccine mandate approach is not the answer.

In order to restore life pre-pandemic, Americans need to take a deep look at their leadership at the state level. Vaccine mandates may potentially lead to interstate migration, where the unvaccinated flee blue states and flock to red states with no mandates.

If things continue this way, the United States will revert to a segregated nation akin to the Civil War, but this time it will not be based on the Union versus the Confederacy, but the vaccinated versus the unvaccinated.