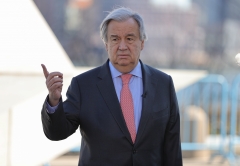 Pushing Back Against the UN’s Progressive Agenda, Which Seeks to Redefine the Family

“There is no definition of the family under international human rights law.” So stated United States staff in a draft report in 2016. In the report, the authors claimed that the term “family” should be understood “in a wide sense”—whatever that means.

This past Friday, the United Nations celebrated the “International Day of Families,” to which we might respond: If there is no definition of the family, then precisely what is it that we are celebrating?

This confusion contains echoes of the head-spinning confusion we find among the new breed of feminists who, when asked, insist that there exists no objective definition of “woman.” Anybody can be a woman, including biological males, if they “identify” as a woman. To say otherwise is transphobic or “trans-exclusionary.” In this case, one might wonder what the point of being a feminist is.

Such confusion, characterized by an apparent internal contradiction, might seem comical at face value. But it is not an accident, and it is not benign. At the heart of the progressive methodology, one often finds this deliberate deconstruction of the meaning of words—even (or perhaps, especially) the most solid of words, like “man,” “woman,” and “family.”

Redefining the family out of existence

In a brilliant 1994 article, philosopher Allan Carlson sounded the alarm about the deliberate effort at the United Nations to sow confusion and ambiguity about the term “family.” At the time, UN staff and representatives of many nations were debating the draft document for the upcoming International Conference on Population and Development.

Carlson, however, was concerned by the way the document couched the nature of the family not in terms of certain, objective characteristics, but rather in reference to “change.” Current policies and procedures, said the document, “give insufficient recognition to the existing diversity of family forms” (V. A.5.1). Thanks also to “rapid demographic and socio-economic change,” it continued to say, “patterns of family formation and family life are continuing to undergo considerable change.”
(V. A.5.1)

According to Carlson, this language emphasizing some new diversity in the family, and rapid, ongoing change, was a deliberate continuation of a strategy launched in the 1930s to achieve the Marxist aim of abolishing the family, but without having to directly target the family.

That the family could be abolished without directly attacking it was the “discovery,” says Carlson, of the socialist social scientists Alva and Gunnar Myrdal. What they realized, says Carlson, is that “as advocates for socialism, modernity, feminism, and secularism, they did not need to attack the family as an institution of oppression and reaction. This had been the great error of the late 19th century Marxists, who had linked the existence of the family to private property and had so demonized the home. Rather, by redefining the family as a malleable, evolving institution, the Myrdals saw they could co-opt the family—and the warm sentiments surrounding it—for socialist, secularist ends.” (Emphasis added)

As Carlson notes, talk about the growing “diversity” of families and the “change” experienced in the modern age ultimately has the same effect as abolishing the family. If every conglomeration of human beings, united by location or vague emotional bonds, is now a family, and if the family is constantly changing, then the word “family” has lost its teeth. If everything’s a family, then nothing’s a family. And that’s the point. Once the term has been expanded beyond recognition, even those who ardently hate the family can still claim to “celebrate” it.

Carlson’s words appear prophetic in light of the 2019 report entitled “Families in a Changing World” put out by UN Women. “Change” and “diversity” with respect to the family are recurrent themes.

“Although the experience of family life is essentially universal, families themselves do not take one form, and nor should they,” begins the report. The report goes on to note that “families” can now include single-parent households, same-sex couples, couples who have deliberately chosen to avoid having children, couples who are cohabitating rather than getting married, and other arrangements.

By comparison, the Catechism of the Catholic Church gives an extremely straightforward definition of “family”: “A man and a woman united in marriage, together with their children, form a family.”  It further states: “This institution is prior to any recognition by public authority, which has an obligation to recognize it. It should be considered the normal reference point by which the different forms of family relationship are to be evaluated.” (Emphasis added)

In other words, while it is true that other arrangements and relationships may participate somewhat in the nature of family—this is especially true of “extended” family—all such arrangements must be referred back to the essential core of family: a man and a woman, united in marriage, and the children they beget.

Ultimately, I am amazed—or better yet appalled—at the hypocrisy of the UN. In its statement about the International Day of Families, it speaks of protecting families, emphasizing the “importance of investing in social policies protecting the most vulnerable individuals and families.”

Yet this is the same institution that has invested many billions of dollars in attacking the very essence of the family by promoting population control (sometimes even of a coercive nature), artificial contraception, and abortion. Target 3.7 of the UN’s Millennium Development Goals, for instance, is to “ensure universal access to sexual and reproductive healthcare services, including for family planning.” The term “sexual and reproductive healthcare services” is understood by many UN bureaucrats to include contraception and abortion. It is difficult to imagine a more direct attack on the family than abortion, which deliberately deprives one member of a family of his/her fundamental right to life. Furthermore, how can we “celebrate” the family while simultaneously urging (or even coercing) couples to avoid having children—the natural outcome and expression of marital love?

The UN is also the same institution populated by bureaucrats who are constantly using their weight to chip away at the integrity of the family by striving to redefine the term to include all manner of “alternative” arrangements.

In 1994, the United Nations celebrated the “International Year of the Family.” In the proclamation for the year, the UN authors stated that “families assume diverse forms and functions from one country to another, and within each national society. These express the diversity of individual preferences and societal conditions” (I. 3.b.).

"In the abstract, the idea of an 'International Year of the Family' is to be welcomed, as a valuable celebration of the smallest social unit, the incubator of new life, and the source of meaning and mutual protection. In practice, however, the United Nations’ bureaucracy has of late produced documents that would damage and diminish true family rights and family integrity. At the heart of this strategy lies a deliberate redefinition of the family that strips this word of its authentic and legitimate meaning. An effective counter-strategy would begin by restoring the true meaning of the word and then insuring that specific recommendations advance or support that meaning." (Emphasis added)

Fortunately, there are still many nations at the UN that do support the natural family and that are determined to push back against the agenda of the progressive bureaucrats in just the way Carlson suggested. In 2014, for instance, as one pro-life UN campaigner put it, over 100 nations that were “sick and tired of the constant bombardment from European and other first world member states about same-sex marriage, contraception and abortion” banded together in an effort to defend the family.

One result of their efforts was the passage of two Human Rights Council resolutions that affirmed the central importance of the family as the “natural and fundamental group unit of society,” while deliberately excluding references to the “diverse” forms that families allegedly take. The statements also emphasized the primacy of the family over the state in the education of children.

One radical group, the Sexual Rights Initiative, was furious that the 2015 resolution failed to recognize “that diverse forms of family exist”; the group particularly opposed an amendment (which unfortunately did not pass) that would have explicitly defined marriage as being between a man and a woman. They also fretted that the resolution “seeks to elevate the family as an institution in need of protection without acknowledging the harms and human rights abuses that are known to occur within families.”

Back in 1994, Allan Carlson accurately diagnosed the battle that is going on at the UN for the heart of the family. This battle centers on the meaning of words. While it goes without saying that I am all for celebrating an International Day of Families, in light of the ambiguity that pervades the UN’s documents, it seems well worth asking: Which family?

Our response should be the family outlined so well in the Catechism, which states:

"The family is the original cell of social life. It is the natural society in which husband and wife are called to give themselves in love and in the gift of life. Authority, stability, and a life of relationships within the family constitute the foundations for freedom, security, and fraternity within society. The family is the community in which, from childhood, one can learn moral values, begin to honor God, and make good use of freedom. Family life is an initiation into life in society." (2207)