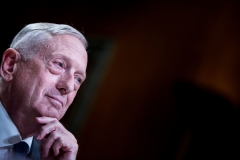 In the 2020 presidential election, leftist media and well-funded activist groups are working hard to drive a wedge between President Donald J. Trump and the troops he leads.

Much to the dismay of erstwhile admirers of former Defense Secretary and retired Marine General James Mattis, activists are using Mattis’ name and published statements to fuel a concerted national campaign to defeat President Trump and Vice President Mike Pence.

Previously, Mattis had refrained from comment on the presidential race, and he has not endorsed Joe Biden for president.  In June, however, he denounced President Trump for what he called a deliberate effort by the president to divide the American people.

Mattis was particularly incensed about President Trump’s walk from the White House across Lafayette Park to the historic St. John’s Episcopal Church on June 1.  At the time, well-organized rioters were destroying and looting property in Minneapolis and several other cities, taking advantage of citizens who were exercising their right to protest the tragic death of George Floyd at the hands of police.

In the nation’s capital, hooligans defaced the Lincoln Memorial and the World War II Memorial. Someone damaged the pale yellow Church of Presidents with spray paint and fire in the basement. Shortly thereafter, anarchists splashed graffiti on the base of a statue of former President Andrew Jackson, throwing ropes over the bronze equestrian sculpture and threatening to tear it down.

Mattis criticized what he perceived as misuse of the military in quelling the violence. But his article misconstrued what locally controlled authorities did to enforce a curfew in Washington, D.C. and took statements made by President Trump and others, such as Defense Secretary Esper, out of context.

James Carafano of The Heritage Foundation has noted there was zero evidence that President Trump caused a constitutional crisis or exceeded his authority in dealing with riots and looting that occurred in Washington, D.C., St. Louis, Chicago, or Portland.

Instead of drawing upon his extensive knowledge of history to make constructive suggestions on how to deal with violent civilian unrest, Mattis wrote, “We must not be distracted by a small number of lawbreakers.” He even stooped to compare President Trump to German Nazis who relied on “divide and conquer” tactics before the Normandy invasion.

Given his high profile, James Mattis should have known that political adversaries would weaponize his words, published in The Atlantic, in their campaign to defeat Trump. Joining forces with the Never Trump Lincoln Project, the Progressive Change Campaign Committee (which supports far-left candidates like Sen. Elizabeth Warren and Rep. Alexandria Ocasio Cortez) excerpted passages from Mattis’ op-ed in a full-page Sunday newspaper political advertisement that ran in swing states Wisconsin and Michigan.

The group ran “Statement by James Mattis” ads, headlined “Democracy is at Stake” and estimated to cost $20,000 in at least one paper in which they ran, and also solicited small donations to run more ads in battleground states.

General Mattis deserves respect for his distinguished military career, and some credit for supporting President Trump’s call for a full review and revision of the Obama/Biden policies regarding transgenders in the military. President Trump might have avoided overwrought controversy by simply expressing quiet resolve to defend St. John’s Church and all other historic structures against vandalism and destruction.

Trump did deter more vandalism by invoking a law that imposes a 10-year prison penalty for damaging veterans' memorials.  None of his actions justified ridiculous charges that military leaders might have to remove Trump from the White House if he loses the election.

Some retired military leaders endorsed Joe Biden after The Atlantic’s editor-in-chief Jeffrey Goldberg published a thinly sourced article accusing President Trump of disparaging the troops during a 2018 visit to France. The story’s allegations were based on anonymous sources and strongly denied by administration officials who were present with Trump in France.

Defense Secretary Mattis left the administration after disputes with Trump about relations with European allies and American troops in Syria.

If any military person has good reason to oppose Trump’s policies in Syria, retired Army Green Beret Joe Kent would be that person.

Kent’s remarkable wife, Navy Chief Petty Officer Shannon Kent, was a cryptologic technician, a linguist, and the mother of two toddler boys. In January 2019, Shannon was killed by a suicide bomber, together with three others, during a mission to fight ISIS in Syria.

Shannon Kent’s grieving husband wrote an op-ed rebutting critics who accused President Trump of not caring about the troops. Kent also praised Trump for asking tough questions and doing his utmost to protect and support the greatest fighting force the world has ever seen.

They and other Obama-era retired officials opposing Trump will not have to deal with the harmful consequences of reinstating controversial social policies that have weakened morale, discipline, and overall readiness.

The retired military campaign to defeat Trump is setting a bad example for active duty personnel who are duty-bound to follow legal orders. This includes members of the National Guard who, in some states, have been asked by governors to assist in restoring order.

Perhaps Secretary Mattis and other military critics should concern themselves with America’s ability to fight and win real wars, not political wars to remove the commander-in-chief.

Elaine Donnelly is president of the Center for Military Readiness, an independent, non-partisan public policy organization that reports on and analyzes military/social issues.