It’s Time to Deflate the Super Bowl Abuse Myths, Once and for All 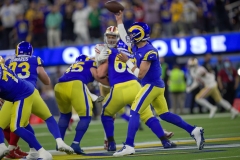 On Jan. 28, 1993 a group of women called a press conference in Pasadena, Calif. Sheila Kuhn of the California Women’s Law Center made the claim that Super Bowl Sunday was the “biggest day of the year for violence against women.” She went on to say that police reports of beatings and hospital admissions in Virginia rose 40 percent following games won by the Washington Redskins.

The next day, Lenore Walker, author of "The Battered Woman," went on “Good Morning America,” asserting she had gathered a 10-year record showing a significant increase in violence against women on Super Bowl Sundays.

That dubious assertion was buttressed by a Jan. 30 story in the Boston Globe saying women’s shelters and hotlines are “flooded with more calls from victims [on Super Bowl Sunday] than on any other day of the year.”

Ringle then checked with University of Buffalo professor Charles Ewing, who purportedly had warned that shelters and hotlines were inundated on Super Bowl Sunday. But Ewing told a different story to Ringle: “I don’t think anybody has any systematic data on any of this.”

In his Jan. 31 article, “Debunking the 'Day of Dread' for Women,” Ringle revealed to his readers that the abuse claim was actually a preposterous fraud.

Despite the front-page expose, the hysteria raged on. NBC executives felt compelled to run a public service spot before the big game, urging men not to beat up their wives after every touchdown.

The Super Bowl Hoax, as it was later dubbed, no doubt will become a classic in the propaganda textbooks. And it did succeed in triggering a surge of letters and phone calls to Congress. The following year, the sweeping Violence Against Women Act was signed into law by President Clinton.

But feminists are loath to abandon a winning strategy. So the gender warriors began to claim that Super Bowl Sunday was a mecca to sex-traffickers. Before the 2011 Super Bowl event, for example, Texas' then-Attorney General and now-Gov. Greg Abbott made the claim that the Super Bowl is “commonly known as the single largest human trafficking incident in the United States." How do we know these claims to be baseless? Because despite a huge increase in police surveillance at these events, there was no increase in the number of arrests of actual traffickers.

So beginning in 2019, a number of groups rallied to point out the mendacity:

But these warnings did not save Cindy McCain, wife of the former Arizona senator, from embarrassing herself. A self-appointed advocate for the anti-trafficking cause, McCain claimed to have spotted a child-victim in the Phoenix airport. McCain explained, “It was a woman of a different ethnicity than the child, this little toddler she had, and something didn’t click with me….I went over to the police and told them what I thought, and they went over and questioned her. And by God, she was trafficking that kid.”

But that account turned out to be as bogus as the claim of a 40 percent domestic violence spurt. The Phoenix Police Department reported it had “no evidence of criminal conduct or child endangerment.” Mrs. McCain was forced to issue a public apology.

There are many other examples of claims made by domestic violence activists that later turned out to be one-sided, misleading, or outright falsehoods. Such deceits end up discrediting the very movement that the advocates claim to support.

So on Sunday, Feb. 13, let’s invite everyone to relax, enjoy the big game, and not be distracted by dishonest claims of a “spike” in domestic violence or human trafficking.

Edward E. Bartlett, Ph.D. is the founder of the Coalition to End Domestic Violence.