Human Rights Day: Why Has the Decades-Long Quest for Gender Equality Eluded Men and Boys? 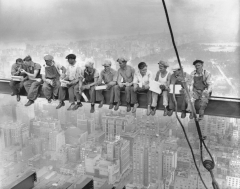 Twelve years ago the United Nations established UN Women, a step heralded as a “historic step in accelerating the Organization's goals on gender equality and the empowerment of women.” Indeed, women are disadvantaged, compared to men, in such areas as sex-selective abortion, early child marriage, sex trafficking, and other areas.

But what about gender equality for men? Persistent male disadvantage has been documented in a number of areas:

1. Life Expectancy: In the United States, women live 82 years on average, compared to the 77-year lifespan of men.  Several factors contribute to this gender gap, including the grim reality that the vast majority of suicides and 92% of occupational deaths affect men.

In every country, male longevity trails behind female lifespans. Despite this compelling fact, an article in the Bulletin of the World Health Organization admitted that men’s health “has received little national, regional or global acknowledgement or attention from health policy-makers or health-care providers.”

2. Criminal System: Extensive research reveals that the criminal system favors women. For example, men and women are equally likely to commit domestic violence. But the criminal system is distinctly biased against men in terms of prosecutorial decisions to file charges, reduce the severity of charges, and in sentencing.

3. Child Custody: It is widely recognized that children do better when both parents continue to be actively involved after a divorce. In some states, fathers are awarded 50% custody time.  But nationwide, the female parent is granted about 65% of custody time, whereas the male parent receives only 35%.

4. False Allegations: Men are nearly twice as likely as women to be victimized by a false accusation. A survey sponsored by the Center for Prosecutor Integrity found that 11% of men, compared to 6% of women, report being falsely accused of domestic violence, sexual assault, or child abuse. Such false allegations have a broad range of negative, life-altering consequences. False allegations against men are known to be a global problem.

5. College Enrollments: Males are lagging in the number of college enrollments. In 2020-21, 57.2% of bachelor’s degrees were awarded to females. Similar trends are being seen in other countries, as well, with lifelong consequences for members of the male sex.

Subverting the Truth at the United Nations

Domestic Violence: Over 300 studies conducted in 40 countries show that domestic violence is an equal opportunity problem for men and women. But each year, UN Women sponsors a “16 Days of Activism Against Gender-Based Violence” that only recognizes male-on female violence – a view amounts to an ideological campaign. The effect of such biases is to stereotype men as abusers and perpetrators, which negatively affects the ability of male victims to receive help.

Such stereotypes also impair the ability of fathers to remain involved in the lives of their children after divorce, because judges may favor mothers in custody decisions because they believe fathers are more likely to engage in child abuse, despite the fact that the opposite is true.

COVID Lockdowns: During the COVID pandemic, UN Women issued a report on COVID-19 that made the fear-inducing claim that “With more than half of the world’s population under lockdown, domestic violence reports in particular spiked during the first weeks of the pandemic outbreak.” In support of this dubious statement, the UN Women report cited a newspaper article that largely consists of reports of calls to abuse hotlines, which are known to be notoriously biased. The Guardian article concludes, “Once official figures are released next week, we [will] know the true scale of the problem.”

But a subsequent review of these “official figures” in the United States revealed:

Similar conclusions were reached in Australia, and well as in eight other countries: Albania, Austria, Canada, India, Netherlands, Russia, Spain, and Tasmania.

School Attendance: Globally, the previous disparities of school enrollments have been all but eliminated: By 2021, 86% of girls and 87% of boys were attending elementary school. The UNICEF summary highlights the female disadvantage in selected regions: “in countries that have not reached parity, particularly in Africa, the Middle East and South Asia, girls are more likely to be disadvantaged than boys.”

But a closer look at UNICEF’s “Out-of-school” spreadsheet reveals that in Eastern Europe and Central Asia, as well as in Eastern and Southern Africa, male school attendance is lagging behind girls. Misleadingly, the UNICEF summary makes no mention of this fact.

Despite its high-profile commitment to addressing gender inequality, the United Nations has no agency or program to address the male lifespan gender gap, sex biases of the criminal system, sex discrepancies of child custody awards, false allegations, or college enrollment numbers. In the domestic violence arena, UN Women is actually utilizing the issue to promote dishonest sex stereotypes against men.

Human Rights Day is on December 10th. The Day  provides an opportunity to reflect on our advances in human rights, and identify areas that are in need of greater attention. Perhaps it’s high-time that the United Nations establish a new agency for UN Men.