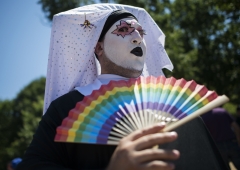 Being “male” or “female” has been understood since time immemorial to be innate and immutable. So many are baffled that anyone would want to debate the meaning of “sex,” much less consider ways to actually alter one’s status as a male or female.

Delving into this debate begins with an understanding of Marxist ideology. Marxism is striving for a social utopia known as communism, which is characterized by the elimination of class differences, common ownership of property, and a "withering away of the state," as "Communist Manifesto" co-author Friedrich Engels put it. Such radical changes entail a massive concentration of power in the hands of government apparatchiks, which is why socialist societies quickly turn elitist, oppressive, and deadly.

Engels also theorized that the emergence of class society gave rise to the so-called “patriarchal” institution of marriage, with its attendant “oppression” of women. So what better way to break free from the shackles of marital enslavement than to eradicate differences of biological sex?

To appreciate the meteoric rise of this radical movement, we need to understand the alphabet soup of genderology:

First, sexologist John Money introduced in 1955 a new word: “gender.” Originally, “gender” referred to one’s roles in society, such as factory worker, parent, homemaker, and so forth. But quickly, the word became synonymous with “sex.” So if you inquired persons as to their “gender,” they responded either “male” or “female.”

Before long, “LGBT” – lesbian, gay, bisexual, and transgender – was introduced. This acronym was superseded by LGBTQ, the Q standing for “queer” or “questioning.”

Third came the phrase “gender identity,” a term that suggested the fluidity of one’s gender. Amazingly, there are 72 genders to choose from. If you are really ambitious and willing to change your gender every 20 minutes, you could get through all 72 in just one day!

To cap it all off, activists introduced the concept of “gender dysphoria,” which is defined as the distress that a person feels due to a mismatch between their sex at birth and “true” gender identity.

These concepts were aggressively promoted by activist groups such as GLSEN. GLSEN describes itself as “championing LGBTQ issues in K-12 education since 1990.” Before long, schools became open advocates for the LGBTQ political agenda. In the words of one distraught parent, “our children are being experimented on.”

LGBTQ activism broke into the national consciousness in 2015 when a male-at-birth transgender student in Illinois demanded use of the girls’ high school locker room. Even though local parents were enraged with the idea, the federal Office of Civil Rights ended up siding with the transgender student. A new front in the culture wars had been opened.

In 2021, the transgender debate moved to the national stage, as Democrats introduced the Equality Act, HR 5, that would have changed the 1964 Civil Rights Act. The bill sought to amend the word “sex” to include “sexual orientation and gender identity.” The Equality Act saw its demise thanks to a Republican-led Senate filibuster in May 2021.

In schools, the Biden Administration is now planning to expand the Department of Education’s long-standing definition of “sex” to include “sex stereotypes, sex-related characteristics (including intersex traits), pregnancy or related conditions, sexual orientation, and gender identity.”

At long last, however, we are witnessing a culture shift on the issue. Parents are seeing their parental rights eroded into thin air, and female athletes are predictably losing to their stronger and taller transgender counterparts. Even more troubling is when as boys and girls are told that their normal adolescent insecurities are evidence of long-suppressed gender dysphoria. This is what happened to California teenager Abby Martinez, eventually leading to her tragic suicide.

These are a few of many examples of the sea change that is happening before our eyes:

Further proof of an impending return to fairness happened in mid-May, when lawmakers introduced bills to clarify the definition of “male” and “female.” The Senate and House Resolutions state, “for the purpose of Federal law, the ‘sex’ of an individual means his or her biological sex (either male or female) at birth.”

Fair-minded discussions about sex differences are not evidence of a resurgence of bigotry. Rather, they are a recognition that biological males and females possess human rights, as well.

Edward E. Bartlett is a former university professor and worked for 17 years for the Department of Health and Human Services.