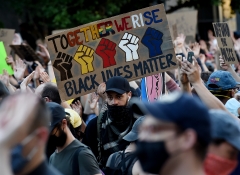 In July 1969, three American astronauts landed on the moon. It wasn’t just a great technical triumph. It was a much-needed respite amid social and political chaos.

America was already beset by Vietnam and civil rights struggles. That summer of 1969, things got worse. The nation was shocked by news of a riot after a confrontation between gay rights activists and police outside the Stonewall Inn in Greenwich Village on June 28. Then came news of the drowning of Mary Jo Kopechne in a fatal vehicle accident by an intoxicated Sen. Ted Kennedy in Chappaquiddick, Mass. late-night July 18-19. August brought word of the hideous Manson “Family” murders of pregnant actress Sharon Tate and others in a brutal attack the night of August 9-10. A week later came the spectacle of Woodstock, where a half million gathered in rural New York in an unprecedented display of rock n’ roll, drugs, and hedonism.

And still more was stirring beneath gathering storm clouds. The National Convention for Students for a Democratic Society (SDS) opened on June 18, 1969 at the Chicago Coliseum on South Wabash, just down the street from police headquarters, home of the so-called “pigs” with whom the radical Weathermen prepared for battle. A mighty clash ultimately erupted in October in what became known as the Days of Rage.

The organized riot commenced in early October, when the “flower children” dynamited the statue commemorating Chicago police killed in the 1886 Haymarket Riot. As far as the protesters were concerned, these men were not Chicago’s finest, but jackbooted swine. Cops were bad. Violent clashes with over 1,000 policemen ensued. Americans watched on their televisions in horror.

Adding fuel to the fire, not only was there social and political chaos in 1969, but even a pandemic afoot. A malicious virus emanated from Asia. Known as the Hong Kong Flu, technically called “H3N2,” it killed approximately one million people worldwide, including more than 100,000 in America—a death toll chillingly similar to COVID-19. It was brutal on the respiratory system.

And thus, amid the turmoil, the moon landing on July 20 by the Apollo 11 crew of Neil Armstrong, Buzz Aldrin, and Michael Collins was a wonderful respite. The whole of humanity watched with admiration and appreciation.

All of which seems very appropriate and very ironic context given current events. Once again, America has boldly gone forth with another historic space mission. In Florida, SpaceX lifted into orbit, heralding a new era. Here was a private company sending astronauts into orbit, almost a decade after the shelving of the space shuttle program.

Appropriately, the two astronauts shot off from the same Florida launchpad that had served the Apollo missions. This time, however, resurrecting the program was not the broke federal government but a private company called SpaceX, founded by billionaire Elon Musk. The impressive partnership between NASA and the private company breaks new ground in many ways. President Trump, who rightly called the feat “an inspiration for our country,” noted that the launch “makes clear the commercial space industry is the future.” Sights are literally now set on Mars.

Of course, this launch in 2020, like that in 1969, likewise occurs during a time of social-political chaos and pandemic, with cities smoldering in protest over the police killing of George Floyd, with demonstrators masking up as COVID-19 continues its morbid march. The disease has robbed the lives of more than 100,000 in America alone.

With such bad news, the SpaceX launch should have been a welcomed respite. And yet, unlike July 1969, this seems to have elicited comparatively little coverage. Sure, this launch wasn’t as historic as July 1969. Apollo 11 is hard to surpass. What’s striking, however, is how little attention SpaceX seemed to receive. You could’ve easily missed it.

This launch is likewise historic, particularly in terms of the horizons that can literally open up. Nonetheless, those hopes and dreams were overshadowed by the Floyd protests and riots and by COVID-19. That’s too bad. This should’ve been a moment of unity during a time of crisis. Today, it seems, all news is political news, or bad news. Well, here was some good news for a change.

The SpaceX launch says something promising about human achievement amid trial, about our humanity rising above our sinfulness. And yet, have we paused to recognize that? I think not. And that, too, seems a sign of our sinfulness.

The world is on fire in 2020. It was in 1969 as well. It’s easy to focus on the negative. And we should rightly call out injustice. But we should also pause to reflect on what is good.

Dr. Paul Kengor is professor of political science and chief academic fellow of the Institute for Faith and Freedom at Grove City College. His latest book (April 2017) is A Pope and a President: John Paul II, Ronald Reagan, and the Extraordinary Untold Story of the 20th Century. He is also the author of 11 Principles of a Reagan Conservative. His other books include The Communist: Frank Marshall Davis, The Untold Story of Barack Obama’s Mentor and Dupes: How America’s Adversaries Have Manipulated Progressives for a Century.