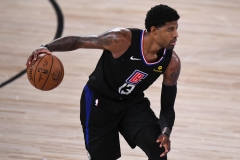 Paul George #13 of the LA Clippers dribbles the ball during the second half against the Denver Nuggets. (Photo credit: Douglas P. DeFelice/Getty Images)

With the presidential election dominating the news cycle, you may have missed the fact that conservatives, moderates, and not-crazy liberals just won a huge victory against cancel culture. It didn’t come with a lot of flair, noise, or tweets. In fact, the victory was won with the push of millions of buttons.

That’s right. Thanks to conservatives who chose not to use their “second vote” – their wallets, purses, and credit cards – to support the National Basketball Association, the league has decided not to push left-wing politics on the court next season.

“I understand those people who are saying, 'I’m on your side, but I want to watch a basketball game [instead of Black Lives Matter politics],'" said NBA Commissioner Adam Silvers. “My sense is...that those messages will largely be left to be delivered off the floor.”

Some say the league’s terrible 2020 ratings is due to the pandemic – other leagues’ viewership ratings have also fallen. But why else would Silvers risk alienating players, fans, and the left-leaning sports press by saying anything negative about Black Lives Matter? The violent movement may be less popular than it used to be, but that doesn’t change the fact that many NBA players and fans support BLM because they, like millions of other Americans, think the movement wants to save black lives.

The fact is that the NBA never should have backed BLM in the first place. First, it’s putting politics into what should be relaxing entertainment. Second, it’s picking sides when the league’s fans are a mixed political bag. Lastly, BLM is a radical, anti-American group that doesn’t care about black lives. Sports has always brought Americans of many different backgrounds together. The NBA has spent a season devoted to dividing us...exactly the intent of the communist organization Black Lives Matter.

As businessman Tom Klingenstein suggests in a video with over one million views this month, America stands at a crossroads. We can choose traditional American values like virtue and individual liberty, or we can choose the cancel culture that has infiltrated the NBA. This culture isn’t limited to social media or colleges – it has infiltrated even the American family, as schools try to force parents to let their children “change” their gender and allow minors to get abortions without parental permission.

Defeating the NBA season of virtual signaling is not going to do much to stem the tide of cancel culture on its own. However, it is a major victory for ALL AMERICANS, and a reminder that each of us can do our part to defeat the totalitarian version of “equality.” The American version of equality is so much better!

David L. Black, Ph.D., is the Founder and Chairman of the conservative corporate watchdog group 2ndVote.