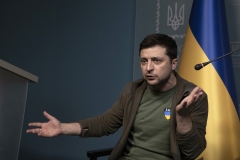 President Joe Biden continues to spend with wild abandon. His latest plan to ensure Uncle Sam’s coming bankruptcy is to propose $33 billion "in security, economic, and humanitarian aid" for Ukraine.

Why the U.S.? Americans have spent nearly eight decades protecting Europe. European governments, after shamelessly leeching off U.S. taxpayers for the entire Cold War and beyond, should take the lead on underwriting their neighbor under assault from Russia.

Playing to the American people’s emotions rather than protecting their interests, President Joe Biden intoned: "We either back the Ukrainian people as they defend their country, or we stand by as the Russians continue their atrocities and aggression in Ukraine." Yet the president’s purported concern is selective. Washington has spent more than seven years supporting murderous Saudi and Emirati aggression against Yemen and initiated its own destructive war of choice against Iraq in 2003.

Moreover, America has no money to give. The deficit last year was $3 trillion. Total federal debt held by the public is approaching the record of 106 percent set in 1946, after World War II. If spending is not restrained, warns the Congressional Budget Office, U.S. debt will hit 200 percent by mid-century, with a financial crisis likely well before reaching that level.

Facing this tsunami of red ink, the Biden Administration is celebrating that the deficit in 2022, though still massive, will be down. Reported the New York Times: "The budget estimates deficits totaling $14.4 trillion over the next decade, down from the current estimate of $15.4 trillion. It also notes that the deficit this year is on track to decline by more than $1 trillion, which would be the largest single-year decline on record."

Yet these reductions occurred only because many of the Biden Administration’s attempts to spend more failed. The president cannot give away more COVID relief money while claiming that the pandemic is easing and economy is recovering. Democratic disunity blocked passage of the $3.5 trillion "Build Back Better Act," the massive progressive giveaway to anyone with their hand out. So far Biden has hesitated writing off student loans since doing so would anger the many Americans who paid their debts.

In any case, the "decline" is not a reduction in debt, but in the predicted increase in debt. Instead of going up an average of $1.54 trillion a year, the national debt will increase "only" $1.44 trillion a year. In Washington, this is considered a fantastic fiscal accomplishment. America is going bankrupt a tiny bit more slowly!

So naturally, the president figures, what’s another nearly $33 trillion in red ink? Biden hopes to add $20.4 billion "for Ukraine and for U.S. efforts to strengthen European security," $8.5 billion "in economic assistance to help the Government of Ukraine," and $3 billion in "additional humanitarian assistance." Finally, there’s "$500 million in domestic food production assistance [which] will support the production of U.S. food crops." (That is, subsidize U.S. farmers already benefiting from higher food prices. Remember, congressional elections are approaching.)

Aid to Ukraine is a worthy cause, but the U.S. already has provided some $3.5 billion in military assistance to Kyiv and another $1 billion for nervous NATO members. More important, Washington is not the only rich industrialized country in the world. It is not the industrialized nation with the most at stake in Ukraine’s defense. And it has not spent decades relying on other nations to protect it. The Europeans are all those and should step up.

For nearly eight decades, their governments have off-loaded responsibility for defense on the U.S. During that time, Washington officials simultaneously flaunted their military power and displayed their political naïveté. Administration after administration complained and whined about European cheap riding. Presidents, secretaries of state, and secretaries of defense demanded and implored, insisted and begged, threatened and wailed when other NATO members violated their constant promises to do more. Nothing changed. Because Europeans saw no reason to do so.

Indeed, U.S. administrations inexplicably sent officials, such as Vice President Joe Biden, to Europe to "reassure" NATO members that America would always protect them no matter how little they did. European publics naturally accepted this invitation to remain dependent forever, preferring to spend their money on generous welfare states and mulct Uncle Sam for every dollar he was worth. Yet Washington still claimed to be shocked by its allies’ cupidity.

As a result, the military outlays of leading European states, most notably Germany, Italy, and Spain, were embarrassing. Indeed, until Russia’s invasion of Ukraine only the United Kingdom and France were vaguely committed to maintaining serious militaries, and that is using "serious" advisedly. For instance, until recently the UK possessed 227 tanks. But that number is dropping to 148. They will be very nice tanks. Truly splendid tanks. However, there still will be only 148 tanks. In contrast, the British produced 5,000 tanks in 1944 alone.

Nor have the border states which consider themselves to be most vulnerable to Russian attack – Poland and the three Baltic nations – acted on their rhetoric. They devote about two percent of GDP to defense, a pittance compared to the threat they long claimed to face. Like everyone else in Europe, they continued to treat defense as a problem for America. They pushed for permanent U.S. garrisons, believing American bodyguards to be their birthright. Why shouldn’t Washington send its best and brightest to watch over Europe as the latter’s residents enjoyed the good life?

As a result of their cheap riding, the Europeans have money in abundance. They should provide Biden’s proposed $33 billion.

For America, Russia’s invasion of Ukraine is a human tragedy, not a military threat. Through most of U.S. history, Ukraine was ruled by someone else, which bothered Americans not at all. Washington treated Ukraine as a "captive nation" for propaganda purposes during the Cold War, but President George H.W. Bush discouraged Ukrainian independence. Ironically, over the last decade, Russia’s Vladimir Putin did more than anyone else to spur a sense of Ukrainian nationhood.

As a victim of unjustified aggression, Kyiv warrants U.S. support, but the U.S. role should be secondary. Washington’s highest duty remains to the American people. That especially means avoiding pressure to escalate militarily and risk war with Russia, which has become an increasing possibility. Treating Ukraine as a proxy war against Moscow increases the cost to Ukrainians and risks accidentally triggering World War III.

Russia’s assault on Ukraine is more menacing to Europe than America. Yet even that threat turns out to be less than long believed. Despite years of fretting over a potential Russian attack, it turns out most Europeans have little to fear. What was supposed to be a walkover for Moscow in Ukraine has turned into a deadly slog, with victory still uncertain. Although not quite a paper tiger, given its possession of impressive numbers of conventional arms as well as nuclear weapons, Russia’s military has been hollowed out by inadequate maintenance, nonexistent noncoms, pervasive corruption, stunning hubris, and authoritarian rule.

However the Russo-Ukraine war turns out, Moscow won’t be launching a blitzkrieg against anyone else in Europe. While the Russian military is likely to learn from its mistakes, some of its problems are systemic and recovery from its losses will be long and difficult. If the Europeans, with a much larger collective economy and population and greater military outlays, act on their newly claimed seriousness, they can deter further Russian misadventures westward.

The start of a more serious European defense could be aiding Ukraine, though it is equally important to push for speedy negotiations and permanent settlement. Having collected trillions of dollars in U.S. defense subsidies over the years, European governments should provide the $33 billion in aid, or however much they wish. Having heard a very loud wake-up call when Russia attacked its neighbor, Europeans should now do the responding and paying. It will take them some time to build up their own forces, but they have the cash to quickly fill Ukraine’s armory and treasury.

It has long been said that the State Department needs an America desk. These days the American people also need someone to represent them in the White House and Congress. President Biden obviously has forgotten who elected him. Becoming an increasingly ostentatious co-belligerent against Russia is dangerous as well as costly, given a desperate Moscow’s growing temptation to strike back.

Europe should take the lead in dealing with both Ukraine and Russia. The U.S. government is broke, while European governments have more reason to give. After decades of defending so many other countries and peoples, Americans deserve a break. Now.