Best Response to Russia Involves Washington Learning From Past Mistakes 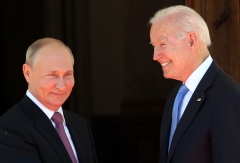 Although often dismissed as engaging in moral equivalency, Whataboutism can be useful in judging U.S. actions. Criticisms of Washington cannot excuse misbehavior of other states, such as Russia today. America’s failures do not minimize the death and destruction wreaked by other governments, often undertaken without a pretense of good intentions.

However, the reality of U.S. policy – true intentions and real effects – demonstrates how much of what the infamous Blob, or foreign policy establishment, does is based on a mix of myths and lies. Most dramatically, America’s checkered record undermines Washington’s claim to be a Vestal Virgin, exuding purity and love as it smites evildoers around the world. Indeed, Whataboutism is perhaps the most important counter to the tsunami of dishonest sanctimony that pours forth from policymakers on left and right every day.

So it is with Ukraine.

Russia’s invasion is a great crime. Vladimir Putin has recklessly initiated a needless war that is wreaking death and destruction on another people. Thousands of Ukrainians already are casualties. A million may already have fled. Russian casualties, many apparently conscripts unprepared for a fight they did not expect, also reportedly are high. The cascade of sanctions and bans against Russia will exact collective punishment on its population, who have no control over their own government. If anyone viewed Putin as a strategic genius going into this crisis, their illusions should have died. By desperately intensifying attacks on cities, he is inflating civilian casualties and damage, arguably a war crime. There is no justification, no excuse, no redemption for his conduct.

Still, Americans should ask, what about?

What about the fact that the U.S. believes in a sphere of interest for itself, and has ruthlessly used military force and economic sanctions to enforce it? The policy’s formal name is the Monroe Doctrine. Washington has never hesitated to impose its will on its weaker neighbors. These days American policymakers are doing their best to impoverish Cubans and starve Venezuelans in an attempt to bring friendly governments to power. Yes, these are evil regimes, but the U.S. has never hesitated to work with dictatorships, even in the Americas, which were pliant and shared Washington’s geopolitical objectives.

What about the fact that the Blob, as the foreign policy establishment is known, would never have accepted Soviet or Russian behavior akin to that of America in Eastern Europe? Imagine if newly ascendant Vladimir Putin had meddled in politics in Mexico and Canada. Pressed an association agreement on Mexico that would have redirected commerce south to a Russo-friendly international confederation. Promoted a coup in Mexico City against an elected, pro-American president. Sent officials to Mexico who openly plotted to bring friendly officials to power. And promised membership for both Mexico and Canada in the Russo-dominated Collective Security Treaty Organization. Hysteria would sweep Washington. No one would stand for the right of Mexico and Canada to choose their own futures. No one.

What about the fact that the U.S. has expanded the Monroe Doctrine into a global principle that Washington is entitled to intervene up to every other nation’s border, including those of Russia and China? A presence that Washington is entitled to back up with force. While the U.S. continues to object to the most minimal Russian and Chinese contacts with Cuba and Venezuela, American policymakers are debating issuing an explicit military guarantee for Taiwan against Beijing. Indeed, American officials often go even further, insisting that they have the right to invade and occupy nations – Iraq, most disastrously – to transform them. While Blob members view this as democracy promotion, countries on Washington’s "to conquer" list consider it to be aggression.

What about the fact that the U.S. has subordinated its interests to those of some of the most odious regimes on the planet? Such as Saudi Arabia, a brutal dictatorship rated less free than Russia and currently engaged in even more deadly aggression against Yemen, one of the world’s poorest nations. The Saudis and Emiratis have spent seven years attacking civilian targets and enforcing a blockade. Hundreds of thousands of Yemeni civilians have died, millions have been displaced, and most of the population suffers from malnutrition or disease and needs humanitarian assistance. Yet Washington has provided and serviced the warplanes, supplied the munitions, shared intelligence, and for a time even refueled the attackers.

What about the fact that the U.S. uses the concept of a "rules-based order" to validate a system created largely by Washington to benefit itself and friendly nations at a time when many countries had minimal capacity to influence international decision-making? Along with its allies the U.S. treats this system as immutable. And insists that resistance to this system is to be met with American military threats and force.

What about the fact that the U.S. routinely ignores international law as well as national sovereignty when invading countries, supporting insurgencies, and attempting to oust governments? In just the 21st century Washington has lawlessly invaded Iraq and occupied Syria, supported the overthrow of governments in Libya and Syria, and backed illegal aggression against Yemen. (Only in Afghanistan did the U.S. have plausible justification for invading and none for remaining for 20 years.) The consequences of American policy have been hideous: hundreds of thousands dead, even more wounded, millions displaced, mass social disruption and civilian hardship, widespread conflict and instability, strengthened insurgent and terrorist movements, and enhanced Iranian influence. Over the last two decades Washington’s foreign policy has resulted in far more human harm than those of China, Russia, Iran, North Korea, Cuba, and Venezuela combined.

What about constant U.S. interference in other elections? A Carnegie-Mellon study found that between 1946 and 2000, Washington had intervened in 81 foreign elections. As for Russia, in 1996, the U.S. famously went all-out to ensure the reelection of Boris Yeltsin over his communist party opponent; the effort was reported in a cover story in Time magazine. Although Washington insists that its current "democracy" aid is nonpartisan, in practice the U.S. favors parties believed favorable to American interests. Foreign governments respond by demonizing and prohibiting foreign support for domestic political activists.

Of course, none of these points validate Russia’s atrocious conduct, or that of other states, such as China and Iran. Nor does criticism of America suggest that its government is worse than those of other nations, like that of Vladimir Putin. However, as Jesus famously taught, one should remove the plank from one’s own eyes before purporting to fix the vision of others. America’s pious proclamations ring hollow when Washington commits aggression and war crimes without accountability, causes mass casualties and instability without acknowledgment, and repeats the process without understanding.

Vladimir Putin’s government bears responsibility for the terrible crime of invading Ukraine. However, American arrogance, ignorance, and recklessness contributed to today’s crisis. As Washington responds to Russian aggression it also should learn from its past mistakes. Otherwise, history seems bound to repeat itself with deadly consequences.