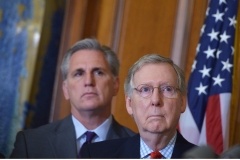 Riddle me this: Why would Republicans fall for the Democrats' age-old ploy of pressuring them into working on "bipartisan" legislation that will only advance the Democratic agenda and damage the nation?

Indeed, what's the point in the GOP puffing up its chest about ousting Liz Cheney from her House leadership position if they're just going to turn around and behave like never-Trumpers by caving on President Biden's agenda? Why would they play footsy with the most militantly leftist party in American history? That can't possibly be good for America, nor can it be good for their political fortunes, as voters don't want them to be spineless wimps.

Republicans need to do more than just talk. They must summon all of their power to block Biden's disastrous agenda — not for the sake of partisan obstructionism but for the sake of the nation.

People likely to vote for Republicans don't elect their representatives to engage in self-congratulatory bipartisan soirees; they elect them to advance beneficial policies and thwart destructive ones. They mustn't appease the cancel culture mobs. The left will demonize Republicans no matter what they do and no matter whether they rally around former President Donald Trump, so how about they just do what is right and aggressively pursue their supporters' policy preferences?

Why am I bringing all this up? Well, because several recent news stories describe Biden's meeting with congressional leaders over the so-called "infrastructure" bill. My alarms went off when I read that Biden was "encouraged" about the deal after meeting with Senate Majority Leader Chuck Schumer, Senate Minority Leader Mitch McConnell, House Speaker Nancy Pelosi, and House Minority Leader Kevin McCarthy. Given Biden's radical agenda, his encouragement means my discouragement — unless he is misreading or being deceptive about McConnell and McCarthy's position.

Biden said: "But I want to make it clear to you: I'm encouraged not just because of one solid meeting with the Republican leader in the House and with Sen. McConnell....I've been meeting with bipartisan leaders for a long time now. So, generically, I'm encouraged that there's room to have a compromise on a bipartisan bill that's solid and significant and a means by which to pay for it without dropping all of the burden on middle class and working-class people." By that, Biden surely means he senses Republicans might be open to his intention to pay for the bill through a hike in the corporate tax rate.

Biden wants to repeal Trump's corporate tax rate cut, which put America more in line with the rest of the advanced world and helped spur economic growth. But corporate tax increases pass through to individual taxpayers. It's false that the wealthy pay less than the middle class. Biden's schemes will further retard economic growth, which will disproportionately harm the middle class and the poor. So I'm not particularly thrilled with Republicans kowtowing to this demagoguery just to appear bipartisan.

Let's review some other Biden statements that illustrate his professed commitment to bipartisanship is disingenuous. In an MSNBC interview, he said: "I want to get a bipartisan deal on as much as we can get a bipartisan deal on....I'm not going to give up on a whole range of things that go to the question of productivity, of increasing jobs, increasing employment, increasing revenues. I'm not willing to give up on that. So we're going to fight those out....Let's see if we can get an agreement to kick-start this and then fight over what's left and see if I can get it done without Republicans if need be."

Do you hear him? Don't start demanding bipartisanship from Republicans when the Democratic president is openly admitting he only intends to be bipartisan on those matters on which Republicans will agree. He expects Republicans to cave on many items, and on all others, he'll railroad them right through via the reconciliation process. He has shown no willingness to compromise his positions. What a great deal for Biden — "Heads I win. Tails you lose."

Making matters worse, all of Biden's proposed solutions are backasswards. You don't increase productivity and jobs by injecting play money into the economy and continuing to pay unemployment benefits that disincentivize people from returning to work, a reality he cynically denies.

A watchdog press would be lambasting Biden for his partisanship, not cajoling Republicans to be bipartisan in the face of such an uncompromising president. But that's a fantasy.

We are already witnessing the poisonous fruits of Biden's programs: inflation, an overrun border that threatens America's sovereignty and security, a constant stirring of racial resentment, foreign policy weakness and a betrayal of our ally Israel, gas hikes partially caused by a war on domestic energy, a war on cops, a war on free, fair, and honest elections, a perversion of our national security by preposterously identifying white supremacy as the greatest security threat, a weakened military obsessed with identity politics, a never-ending climate of fear over the pandemic that keeps schools and businesses shut down, rampant cancel culture, and our academic, cultural, and digital institutions suppressing speech, demanding conformity, and smothering academic inquiry.

Note to Republicans: Don't fall for this sham for the thousandth time. Democrats will promote their agenda zealously, without compromise, and with or without your support. Please surprise us and block them at every turn. You should not set your sights on crossing the aisle for a phony photo-op but on saving the country.