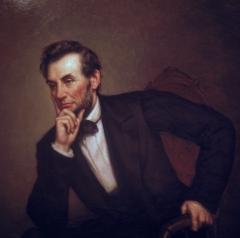 In the last 160 years, the very name and description of the war between the North and the South from 1861 to 1865, has itself often been a bone of contention.

The belief was that this was a more appropriate identifier.

In fact, the most historically accurate description might be "The War Between the Republicans and the Democrats."

As most know, the Republican Party was born out of the growing opposition — especially in the North — to slavery. In fact, it was the election of the Republican Abraham Lincoln leading heavily Democratic South Carolina to seize as its justification for secession from the Union.

Pseudo-intellectuals and revisionist historians will now say that the party realignment in the 1970s drove all the racists out of the Democratic Party, like St. Patrick drove the metaphorical snakes out of Ireland. However, this isn’t the real picture; it’s wishful thinking to make modern Democrats feel better about themselves.

The South went the way of the Democratic Party, from Reconstruction right up to the election of Jimmy Carter in 1976, and even Bill Clinton, who in 1992 made an issue out of attacking rap music and executing a black man on Martin Luther King’s birthday.

With few exceptions, the Democrats could count on a "solid South," due to their "southern strategy" of looking the other way as Dixiecrats systemically kept African Americans under the brutal heel of Jim Crow laws. Why else would the Democrats reject anti-lynching planks in their party platform for years, right up to and through the Franklin Roosevelt years?

The facts are that the South was still loyally Democratic through much of the 1970s and even into the 1990s. In fact, it was the Democratic nominee, Jimmy Carter, who overwhelmingly won the South, carrying almost every single state except Virginia in the former confederacy. Clinton, in the elections of 1992 and 1996, got a healthy share of the Dixie vote taking the racial hotbeds of, for example, Georgia and Louisiana, among others in 1992, and Florida, Louisiana, and Missouri, among others, in 1996.

Michael Dukakis, the Democratic nominee in 1988, spoke at the notorious Neshoba County Fair in Mississippi, just down the road from where civil rights workers were murdered.

At the time, some believed Dukakis was making an appeal to racist voters.

Far more importantly, however, parties may have shifted, but the tactics of the Democrats never have changed.

A cursory study of the history of the Democratic Party shows that it always has been the party of group warfare; blacks against whites, rich against poor, men against women, pro-communist against anti-communist, civilization against Antifa.

Their entire sophistry is one of unifying one group of people to revolt against another.

Democrats are thus the party of zero-sums.

For one group to have more, the other must have less. They have always initiated war against one group or another. They worship identity politics, and want to replace America’s Judeo-Christian Enlightenment tradition with a cult that vilifies whomever they deem "the other."

Every policy action is centered on redistributions, reparations, and reallocations.

Their focus is never on the proliferation of freedom, opportunity, or access.

Instead, they maintain the only pathway to achieve true justice is to seize absolute control of these levers. Once they have absolute power, they will then assign opportunity and access to those whom a "committee" deems worthy.

They pick winners and losers rather than let the marketplace decide.

Hard work and effort means little to them, especially if it’s undertaken by someone from the other side. This is where the darkest sins lie. While one can point to the atrocities that have occurred as a result of this orthodoxy behind the Iron Curtain and in the heart of communist China, there is another overlooked example that’s far closer to home.

To stoke fear against the abolition of slavery, it was the Southern Democrat who would say a freed slave will take from the white man. In plain English, if the God-given freedoms of the enslaved were recognized, they would take power and control from the plantation-owning Democrats.

It was this fear allowing them to collectivize in opposition to the Union, and fire on Fort Sumter.

No matter how much they claim they have shifted, these are still the tactics of the Democrats. Demonize and collectivize. Tear down and destroy all that stands in opposition.

For as long as these Jacobins are indulged, they will push further and further until they are at our very doors.

Disagree? Just ask that couple in St. Louis who found the slovenly, filthy mob at their door and had to use firearms to defend their home and personhood. Good for them. We need more individuals of courage. A quote by Malcolm X summed up the difference between the two parties: "If someone puts their hands on you, make sure they never put their hands on anybody else again."

The destruction of confederate statues has already metastasized into a group at the University of Wisconsin calling for the removal of a statue of Abraham Lincoln for not being sufficiently "pro-black."

For all this destruction, their justification and promise is one and the same.

For their new world to exist, the old one must be destroyed.

All innocent businesses, livelihoods, and individuals locked in the crossfire are necessary casualties. As the exuberantly polysyllabic Bill Buckley once said, "If only the left hated crime as much as they hate hate."

For all people to have more freedom, some must have less.

And never forget, it was a Democrat, a racist, and a Southern sympathizer, John Wilkes Booth, who shot the Republican President of the United States, Abraham Lincoln.

Never forget that Lincoln freed African Americans and Democrats killed him for it.