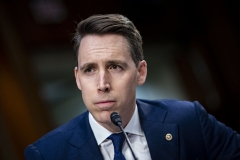 The next great antitrust crusade is upon us, and it’s time Republicans and conservatives rolled up their sleeves and led the charge.

The need is dire and nothing less than the future of fair competition for small businesses hangs in the balance. Corporations, pharmaceutical companies, and of course Big Tech have for years now been choking the life out of smaller enterprises and innovation in this country, slowly eroding away the options for where Americans can buy goods. But to add insult to injury, the big players in our country have decided to adjust to the times and adopt woke, left-friendly policies that stifle one of our founding principles, the very idea of free speech.

We’ve seen it with the recent posturing of Delta and Coca-Cola over the new voting law in Georgia. We saw it with Facebook and Twitter removing news stories like the New York Post’s scoop on Hunter Biden back in the fall. Google has been doing it for years. I could go on, but the bottom line is these companies are exercising their enormous power to try and control what we think and say, and conservatives are just the ones to stop it.

Just this past week, Sen. Josh Hawley of Missouri introduced a bill entitled the Trust-Busting for the Twenty-First Century Act. This welcome legislation would ban mergers and acquisitions with market capitalization that surpasses $100 billion, give the Federal Trade Commission new powers to stop “dominant digital firms” (e.g. Twitter or Facebook) from buying out potential competitors, and importantly updates the Sherman and Clayton Antitrust Acts by establishing that direct evidence of anticompetitive behavior would be enough to support an antitrust claim. This in turn would theoretically allow dominant firms to be broken up without getting bogged down in arguments between economists.

It’s a breath of fresh air, especially when you consider that an update to the Sherman and Clayton Acts to address giant woke corporations has been a longtime coming.

While it is true the Sherman Act prohibits anti-competitive agreements and monopolizing markets, clearly somewhere along the way Amazon and Google fell through the cracks. As I mentioned in a recent column of mine, try naming any serious competitor to Amazon.

Perhaps at one time, Facebook, Twitter, and Amazon fell within the Act’s limitations of thriving in the market purely on merit, but we have long since passed that point. I also somehow doubt that John Sherman had digital behemoths suppressing free speech and controlling newspapers in mind when he helped write the bill.

Speaking of news, or just the flow of information period, conservatives have been vindicated time and time again when our words have been erased in the digital sphere. Big Tech and the media have run rampant, especially since the Trump election, to push narratives and stories that just aren’t true and batting down conservatives when we object.

Consider the treatment of Gov. Ron DeSantis, who most would agree has done admirably in navigating Florida through COVID. Since the media can’t stand to hear about a successful conservative, their rank and file, including the Amazon-owned leftist Washington Post, spent all of 2020 maligning DeSantis while praising a creep like New York Gov. Andrew Cuomo. Or how about the aforementioned New York Post story on Hunter Biden last fall? It probably was in the public interest to know that information about the son of a candidate for president. But Facebook and Twitter, in their infinite wisdom, restricted access to the story and called it “misinformation.” Surprise, surprise.

Establish a narrative and silence inconvenient information; that’s the modus operandi for the woke and the corporate because right now, they have the power to do it.

But it’s not just speech where this power thrives; even a seemingly small act on behalf of a favorite can have a staggering impact in certain markets.

Consider Amazon and Hillary Clinton. In my other column on this subject, I pointed to how Amazon slashed her whining, self-pitying, self-therapy book by more than half the regular list price. That alone made it a number one seller on Amazon as much as Clinton’s name recognition. I might, as an author, love it if Amazon did that for one of my Reagan books, but on principle that kind of power from one small exertion is both astonishing and alarming. In a world where most book shopping is done online, that probably took the spotlight away from Lord knows how many other, much better reads. No corporation, especially one that owns one of America’s largest newspapers and one of its most popular food stores, Whole Foods, should have that kind of power.

Sen. Hawley’s bill should be the flag conservatives rally around, if we take our words about being pro-small business and pro-innovation seriously.

Every Republican, every conservative who loves free speech and thinking for themselves should throw their unconditional support behind this bill and put the corporations trying to control us in the crosshairs. This can be our issue, this can be one of the great policy pushes that help us win control of Congress in 2022. Americans of all political persuasions, sans the far-left, generally don’t like being told how to think and want fair competition for businesses. If those voters see conservatives carrying the flag on this issue, it can’t hurt our chances this electoral cycle.

Conservatives need to decide soon, because otherwise we’ll be living in one of those weird dystopian fantasies where the world is run by three or four massive corporations. We aren’t as far off as you might think.

Government is the umpire. And the umpire needs to call Big Corporate America out at our home.