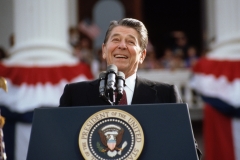 If I had a dollar for every time I’ve had to write an op-ed, give an interview, or send out a tweet to defend Ronald Reagan from liberal revisionist lies and smears, I could have paid off my mortgage while simultaneously funding all four of my children's college tuition.

The American left is really unrelenting in their desire to destroy the Reagan legacy.

It’s been a staple of my adult life almost since the day Reagan left office in 1989, and the lies are like the mythical Hydra of Greek legend.

When you cut off one head, two more grow back in its place.

The liberal distortions get so tiresome.

They are obsessed to the point of madness over Reagan. Why?

I’ve heard lefties talk about Reagan many times, history stalkers like Rick Perlstein, who go apoplectic over the mere mention of the Gipper’s name.

The latest incarnation of this beast to rear its ugly head is a new documentary miniseries premiering on Showtime later this month, "The Reagans." It’s yet another attempt at the so-called "real story" about what was actually going on in the Reagan White House.

If they wanted the real story, they could have just called someone who actually studied Reagan — absent the liberal bias.

Many were there and have written a thing or two since then on the topic.

But instead, the director of this new endeavor has taken it upon himself to load the documentary with the likes of for-hire leftists like Ron Reagan; Maya Wiley, a community organizer of sorts who doesn’t have a clue about Reagan; Ian Haney-Lopez, a Berkley cliché who is even more less-knowledgeable about Reagan; Derek Shearer a left holdover from the Clinton days, and others who all lean ultra-leftist (to put it mildly) and who surely don’t have a leftist axe to grind, whatsoever, with the Gipper or his policies. Much.

By the way, does anyone mind if I say here and now that Ron Reagan’s greatest accomplishment is being born with the last name Reagan?

It’s his pecuniary ace-in-the-hole that no matter how many times he fails in his personal pursuits, he can always just go back to disparaging his deceased parents’ legacy and count on a hefty check and some cheap cheers from liberal elites.

Remember several years ago when he (cough, cough) claimed that doctors extracted a part of his father’s brain. (Excuse me, at this point I am so tempted to say something about brains and the oh so tiresome Ron Reagan but the fruit hangs just too low.)

No one takes her seriously. Except some lightweight leftists. And the National Enquirer.

The director in question is Matt Tyrnauer, a former writer from the left-leaning Vanity Fair who has since somewhat made a "name" for himself in the documentary business.

And while he may indeed be a barely passable filmmaker in terms of editing and production, I have to wonder why he’s got such a stacked deck of left-leaning talent that he interviewed for this project.

Why is he so afraid of the truth?

Why are liberals so cowardly about the facts?

Okay, he interviewed a few conservatives, hoodwinking them into believing they were participating in something credible. They were mistaken.

This is the same bait and switch liberals have been running for years.

It makes me wonder about gene pools.

Why does he not tell us he worked on the 1988 campaign of Michael Dukakis?

Or, just all of the above.

Anyone who watches "The Reagans" should know some things about Tyrnauer going into the series. His last big project was a 90-minute expose called "Where’s My Roy Cohn," an examination of the infamous New York attorney who at one time was lawyer to an up-and-coming real estate mogul named Donald Trump.

Tyrnauer was open that it was a biased documentary, which is troubling to hear from a former journalist, especially given that "The Reagans" is being billed as a work of historical research.

The Cohn movie postulates that the style of governance Trump has employed as president all came from studying at the feet of Cohn.

I’m not here to defend Roy Cohn, but the assertion Trump learned his entire playbook from Cohn, ridiculous as it seems, cannot be definitively proven one way or another.

As a man with journalistic training, Tyrnauer should have known better than to present a mere claim, however likely, as fact.

In its review of the Cohn film, the Sydney Morning Herald put it bluntly: "The argument makes some sense, but just saying it doesn't make it so, and Tyrnauer knows that. He was an experienced journalist with Vanity Fair."

It’s not the only time Tyrnauer has had selective memory about American history. In "Where’s My Roy Cohn," Tyrnauer makes the classic leftist mistake of roasting the House Un-American Activities Committee (HUAC) from the 1950s.

While these hearings often are overshadowed by the antics of Sen. Joseph McCarthy, the HUAC hearings did uncover communist infiltration in the government, which the Cohn film conveniently ignores.

What’s more, Tyrnauer seems to have a soft spot for Ethel and Julius Rosenberg, the infamous and traitorous couple who were convicted of giving atomic secrets over to the Soviets. Even worse, they sold out America not for any deep commitment to ideology, but for money!

Tyrnauer claimed in a 2019 interview with NPR that most people think Ethel was innocent (unfounded), ignoring now declassified documents that make clear she was much more involved with her husband’s espionage than people knew at the time.

Again, it’s troubling to see a man with supposed journalistic training willfully omit crucial facts like this to shape his own narrative.

If Tyrnauer wants to make a film about Ronald Reagan, that’s certainly his prerogative as a filmmaker. However, billing one’s product as historical fact when one has a history of picking and choosing tidbits to craft a questionable narrative raises some red flags.

That, combined with Tyrnauer’s choice of talent for his series, is downright alarming to those of us who knew Reagan, worked for him, and have spent the last 40 years defending his legacy from just these sorts of canards and concoctions.

Arguably the most appalling thing about his apparent distortion of the facts is simply his laziness. In one interview, he describes Reagan as: “...a novice politico in California, he (Reagan) rose fast due to a well-honed charm that could seemingly sell any bill or talking point, no matter how hard rightwing kook."

So, to Tyrnauer, Reagan’s experience as the head of the Screen Actors Guild, settling major disputes and creating residual payment for actors, was of zero consequence.

Also, "Ads placed him on horseback in a cowboy hat...." That’s it? It was all just ads? It couldn’t have been that Reagan had been riding almost his whole life, owned a ranch with multiple horses, or, in 1937, served in the 322nd Calvary Regiment on which he rode, you guessed it — horses. (The unit switched from horses to tank destroyers around the start of World War II. Fun fact: tank destroyers were far more effective at killing Nazis than horses.)

He also goes on to assert Reagan was inexperienced when he became president.

Well guess what, he was far more experienced than Barack Obama when he became president, but I get the feeling that Tyrnauer has no such qualms about Obama’s resume. (Fun Fact: By the way, Reagan was a successful two-term governor of California, which, in 1974, had the world’s sixth largest economy.)

The insulting part isn’t just that Tyrnauer doesn't get it right; he's not good at it.

In plain English, why should anyone take what Tyrnauer is selling seriously, given that he is biased by his own admission? Why should "The Reagans" be viewed as credible when the director has, in previous projects, either glossed over or ignored crucial evidence?

Here’s what’s going to happen with "The Reagans": it's a snarky retro-examination of Reagan, filled with snarky liberals making equally snarky assertions about why Reagan’s presidency was bad for the country.

It’ll be packaged up as gospel truth and sold as such to the citizenry by the same media establishment that failed to predict Reagan’s landslide in 1980.

Or his other landslide in 1984. Or that he left office with a 63% approval rating?

It will attempt to completely bury Reagan’s many accomplishments because American liberalism cannot allow Reagan or Reaganism to go on.

To destroy American conservatism, Reagan’s legacy must be destroyed.

In the meantime, those of us who can actually speak with authority on Reagan will be ready to answer these pot-shots at actual history.

It’s the least we can do for a man who deserves far better than another salvo from a left that seems insanely, obsessively determined — beyond rationality — to smear a dead man.