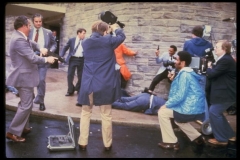 We have seen a sad and pathetic day for American justice and the rule of law.

John Hinckley, Jr., the man who tried to murder President Ronald Reagan 40 years ago, has been granted an unconditional release by a Clinton-appointed judge, Paul Freidman. It should come as no surprise given the state of American law these days, but it still angers those of us who knew and worked for President Reagan.

It would be one thing to argue that Hinckley didn’t actually kill Reagan on that day in March 1981, but even though he failed to slay the president, Hinckley is still a murderer.

That fateful day, one of Hinckley’s bullets struck my friend Press Secretary James Brady, who suffered permanent brain damage for the rest of his life. When Brady did pass away several years ago, authorities ruled the death a homicide as a direct result of the injuries Hinckley gave him.

Years ago, Jim and I both worked on Capitol Hill as senatorial press secretaries. We became lifetime friends. Until his life was ripped away from him by Hinckley.

Make no mistake about it, John Hinckley is a killer who is guilty of cold-blooded murder, a murder that came about from his obsession with Jodie Foster. Like the death of Brady for which he is responsible, the question of whether or not Hinckley should be incarcerated was, in theory, cut and dry.

But even back then, Hinckley was found not guilty by reason of insanity. At least he was confined to a proper institution, but alas it was not to be forever. In 2016, he was outrageously released to live in a confined gated community, even though Secret Service reports indicated he was still obsessed with Foster. That was five years ago, and if Hinckley hadn’t been able to get over his fixation by 2016, I doubt the additional five years since then have changed anything.

I believe now, as I did in 2016, that Hinckley remains a threat to decent society. I’ve read all the reports about psychiatric experts testifying over the years that his state of mind has supposedly improved. That’s all well and good, but no amount of expert testimony can predict if something in the outside world won’t set this man off again should he walk free.

But just as importantly, what sort of message will the judge’s decision this week send to our children and grandchildren? How will our young people, already assailed on all sides by our no-consequences culture, react to the notion that someone can try to kill a president and ultimately walk free, even 40 years after the fact?

At a time when the rule of law in America is being undermined daily, the decision on Hinckley was the worst thing that could have happened.

He is truly human garbage.

The approval for an unconditional release for Hinckley is an insult to Reaganites everywhere, the Brady family, and the legacy of President Reagan himself. But that is the liberals' point. They want to give a giant finger to all decent Americans.

In a country that was built on the foundation of Western law, it’s an appalling thing to see a would-be assassin and actual murderer let off the hook. Friedman and the Biden Justice Department are an insult to all thinking Americans. Because they don’t think.