Biden's Pick for Labor Secretary Embodies the 'Dictatorship of Relativism' 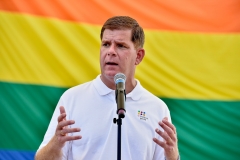 On Thursday, Joe Biden announced that Boston Mayor Marty Walsh will be his nominee for United States secretary of labor. His appointment to the Cabinet is expected to be confirmed by the U.S. Senate.

Walsh's Background---First elected as the city's chief executive in November 2013 and re-elected in 2017, Walsh has served as Mayor of Boston since his first inauguration on Jan. 6, 2014.

Prior to his tenure as mayor, Walsh, 53, served from April 1997 to January 2014 as a representative in the Massachusetts General Court (the State Legislature), elected from the 13th Suffolk District.

The son of Irish immigrants from Connemara and a graduate of Jesuit-administered Boston College, Walsh was the third generation of his family to serve as a head of Local 223 of the Laborers International Union of North America. In 2010, he was elected secretary-treasurer and general agent of the Building and Construction Trades Council of Metropolitan Boston, becoming council president in 2011. He served until 2013.

The Right to Life---A Catholic, Marty Walsh has been the most militantly pro-abortion mayor in the history of the City of Boston. A supporter of legal, unrestricted, and publicly funded abortion, Walsh has embraced even more extreme positions on this issue than his left-wing predecessor, Mayor Thomas M. Menino.

When Walsh first ran for mayor in 2013, he complained about the limited number of abortion clinics in Boston.

In November of 2016, Walsh suggested that Boston could become a kind of sanctuary city for abortions should Roe v. Wade be overturned. In June of 2017, Walsh renamed Worcester Square in the city's South End in honor of the infamous abortionist, Doctor Kenneth Edelin, who was convicted of manslaughter in 1975 (his conviction was overturned on appeal) after suffocating a baby during a botched abortion.

In March of 2017, Walsh led a rally on Boston Common to oppose the defunding of Planned Parenthood. In October of 2019, he led a group of six Bay State mayors in a demonstration in front of the Massachusetts State House calling for passage of the radical, pro-infanticide ROE Act.

In February of 2016, Walsh received the "Men for Choice" award from NARAL Pro-Choice Massachusetts. NARAL cited Walsh's opposition to pro-life crisis pregnancy centers in Boston. That same month, in an interview with The Boston Globe, Walsh promised that he would never again use the term "personally pro-life."

As a state representative in 2007, Walsh voted for speech-free buffer zones around abortion clinics. He received a 100% rating from NARAL during his final year in the legislature. During his re-election campaign for mayor in 2017, Walsh was endorsed by the Planned Parenthood Advocacy Fund of Massachusetts. It was the first time that Planned Parenthood had ever endorsed a Massachusetts mayoral candidate in its history.

Marriage---As a state legislator, Walsh was an early proponent of the deformity of marriage, voting against Protection of Marriage Amendments in 2004 and 2007. In 2008, he voted to repeal a law recognizing the marriage definitions of other states, which had prevented homosexuals traveling to Massachusetts to contract a same-gender civil "marriage."

In March of 2017, Walsh and the City of Boston signed on to an amicus curiae brief to the U. S. Supreme Court in support of same sex so-called marriage. When the Obergefell decision struck down the traditional definition of marriage in the United States, Walsh hailed the ruling, saying he was "deeply moved."

A unanimous 1995 U.S. Supreme Court decision in Hurley v. GLIB had guaranteed the right of parade organizers to control the message of their own event and preserve the traditional character of the parade. Walsh was determined, however, to compel the Veterans Council to accept in the line of march militant homosexual groups which repudiated, and castigated as bigotry, the moral teachings of Saint Patrick's religion.

The instruments utilized by Walsh to accomplish this end included threats, boycotts, intimidation, coercion, and extortion. In one notorious incident at a public venue in South Boston, Walsh shouted threats and obscenities at parade adjutant Philip Wuschke.

Walsh threatened to withhold the parade permit and to personally boycott the parade unless homosexual groups marched. In an attempt to create bureaucratic obstacles and apply financial pressure on parade organizers, he also demanded that the veterans secure, for the first time, an entertainment license and an insurance binder.

In an extortionate exercise in strong arm tactics, Walsh and his police commissioner, William B. Evans, even suggested that they could not protect the parade from violent disruptions by homosexual protesters, and that any resulting deaths or injuries would be the responsibility of the Veterans Council.

Reportedly, Walsh also encouraged boycotts by corporate sponsors and pressured the Gillette Company to deny the use of their parking lot to parade organizers, who had used it as a staging area.

By 2017, the traditional leadership of the Veterans Council had been dispossessed, and a homosexual group which included a number of city employees---OUTVETS---were marching in the parade. Walsh's takeover of the annual event was completed in 2018 when homosexual activist and former Walsh aide Bryan Bishop became the director of parade operations.

Gender Identity---As a state representative in 2011, Walsh voted to include gender identity as a protected class in Massachusetts civil rights law. As mayor in 2015, Walsh supported a City Council measure allowing municipal employees to undergo, at public expense, gender reassignment surgery. In 2017, Walsh supported the application of gender identity protections to public accommodations in Massachusetts.

Contraceptives in Public Schools---As a mayoral candidate in 2013, Walsh endorsed the distribution of condoms to minors in the Boston Public Schools.

No one should be surprised at the appointment of Marty Walsh to Joe Biden's Cabinet. Walsh embodies Biden's idea of what American Catholic government official ought to be---an assimilated conformist to elite secular culture who rejects, as extraneous to public discourse and alien to democratic governance, the scriptural precepts, and natural law traditions of Christian morality.

Biden and Walsh represent "the dictatorship of relativism" which Benedict XVI warned against. For Biden and Walsh, there is no objective moral order. Morality is determined by the current, ever shifting and always temporary, consensus of the Democratic Party.

CJ Doyle is executive director of the Catholic Action League of Massachusetts.