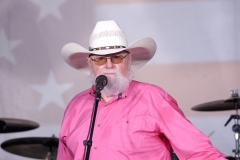 The time is swiftly coming in America when everybody who cares about having a future is going to have to pick a side.

When you get past the very thin patina of “peaceful” protest and look beyond the fallacy that violence and destruction brings about racial equality, you have to come to the conclusion that there is a radical fringe of people who would literally burn this country down, given the opportunity.

You’ll never hear it in the media, but if you’re willing to scratch the surface and dig a little bit, it will dawn on you that this is not a simple protest against the unjust killing of a black man, but a revolutionary street battle against America and everything we stand for that is funded and led by socialist factions, and it’s not just in the U.S., but in many democratic nations around the world.

In other words, it's an all-out socialist attack on our Republic.

I don’t remember a time in my 83 years when the cowardice, incompetence, indifference, and downright impotence of governors, mayors, and others responsible for the protection of citizens and their property have been more evident, disappointing, and disgusting.

What’s going on in our nation is not a “Block Party” or a “Summer Of Love” and any politician naive enough to describe it as such is not only unworthy of their office, but a clear and present danger to the well-being of every human being in their constituency, and thereby America at large.

This is anarchy, plain and simple and the laxity of the curriculum we have allowed to be taught in our schools and the doctrine that socialist university faculties have drummed into the heads of our young people is coming home to roost, as deceived twenty-somethings cause havoc for a cause they have no way of understanding, under the impression they are in a struggle for justice, when all along they are joining the battle to dismantle their whole way of life.

One of the first tenets of communism is destroying and discrediting history. And the destruction of historical statues is just that.

Communism cannot exist where there is a strong belief in God. But now there is a move afoot to remove any statues of Jesus Christ.

A statue of Stevie Ray Vaughan, a musician who had nothing to do with politics or activism, was vandalized in Austin, Tex. recently.

Communism cannot exist in a well-informed society, and to their everlasting shame and tacit treason, the media hides the truth and takes sides with the people who, if they ever came to power, would demolish the media.

Already the signs of pushback, the serious kind, are showing up.

Patriotic bikers have called for a rally in Seattle on the fourth of July to reclaim the CHAZ/CHOP area – or whatever they’re calling it today - return the police precinct to the police from whom it was taken, and in their words, “clean up the mess these communist kids made.” But the mayor finally seems to have come to her senses, so it may not come to that.

Gun sales are through the roof and America is locked and loaded to protect their families and their neighborhoods.

If things are allowed to fester and spread, in my opinion, and at least amongst the people I am familiar with and the area I live in, they will not allow their cities to be occupied, their businesses destroyed, nor their lives interrupted without a fight and almost everybody I know has guns and knows how to use them.

I hope and pray that cooler heads will prevail and bloodshed can be avoided, but, as things stand, that’s exactly where this thing is headed.

So, America, in the next few months you’re going to have to make a choice, about how far you’ll be pushed, the priorities of your vote, the kind of world you want your children to grow up in, and which side of this debacle you stand on.

Stand tall or crawl. Those are the choices.

Pray for our troops, our police, and the peace of Jerusalem.